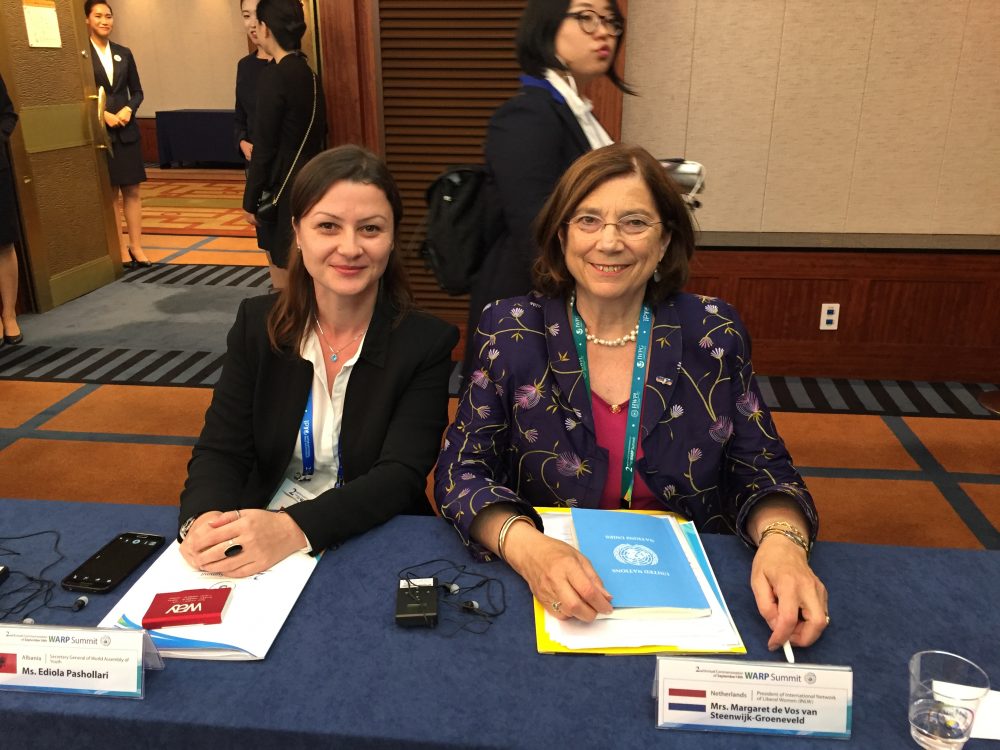 INLW’s President was asked by the International Women’s Peace Group to participate at this Conference to be held from Saturday 17th till Monday 19th of September in Seoul, South Korea. As President of INLW I represented INLW at these different events.

The IWPG have begun by advocating this DPCW within the world women’s organizations. And was the reason for inviting INLW.
I participated in the Advocacy Forum for the Declaration on Peace on the 17th of September, where I took part in the formal Discussion. Informally we discussed the ways that we can spread the word of peace in our countries and in the world and how to advocate the DPCW. 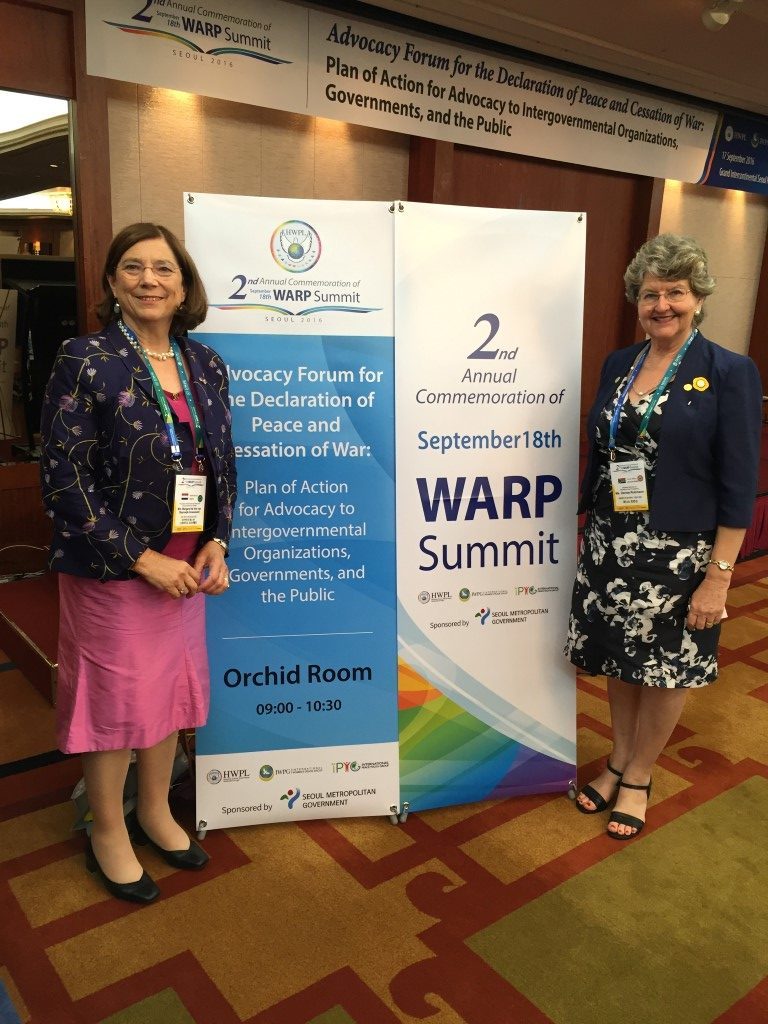 Many views were heard and the discussion was well prepared and therefore fruitful. Margaret was able to voice some wishes as well as worries. She raised the necessity to reach very young children with human rights embedded into the curriculum of the first years of Primary school. They should grow up with human rights being a part of their character. They can then become an example for their parents! 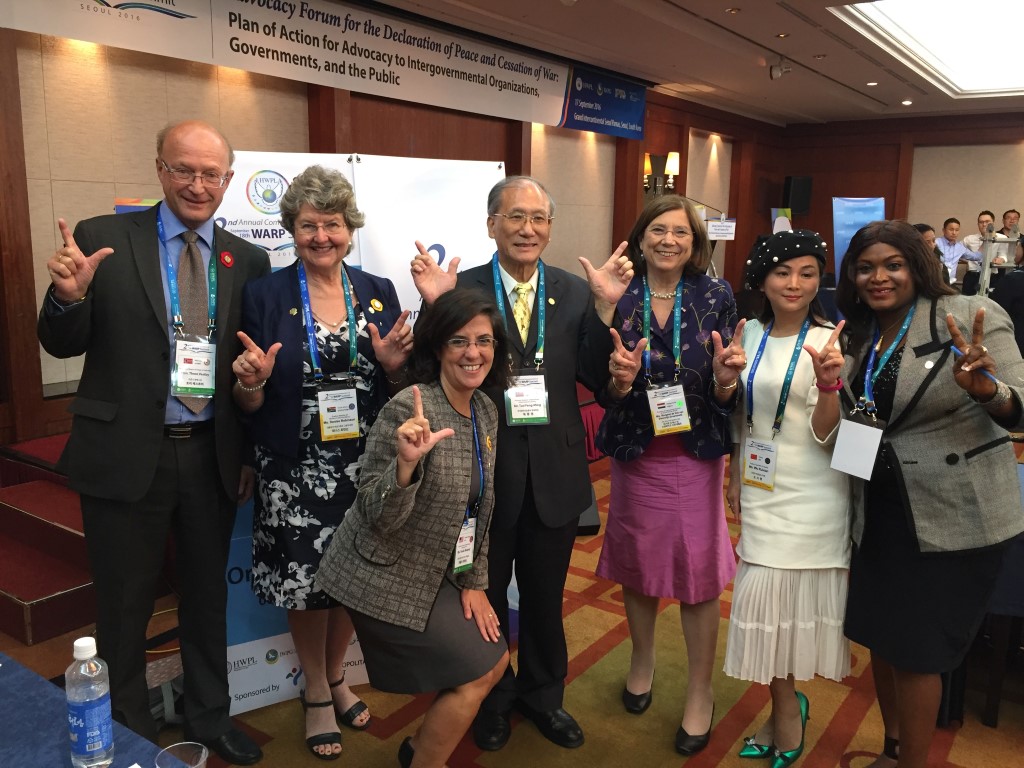 Thore Vestby, chairman of the international organization of Mayors, Denise Richardson, Paula Boland, Ex Dir. Of UN Associations USA (1,2,and 3 to left) were excellent panel members on the panel on “Advocacy Strategy at City level for an advocacy towards Governments”.

Margaret voiced a worry that there are a few states that systematically ignore rules of International Law. Sometimes they are even a permanent member of the UN Security Council, but they reject the ruling of the Permanent Court of Arbitration. What do you do about such countries? You can have wonderful treaties signed, but if some countries just ignore international rules as soon as it concerns their own conduct what do we do? She would like to see the abolishment of the veto rights in the Security Council. That should help! 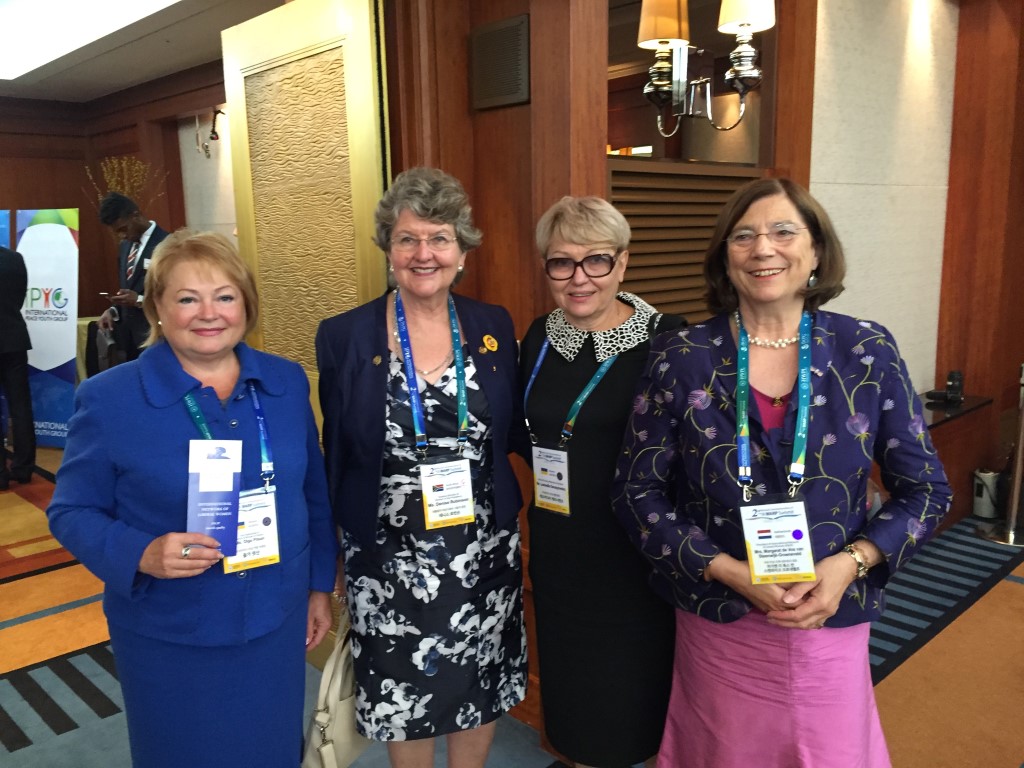 Denise Richardson from South Africa DA and the ladies of the Union of Women of Ukraine and Margaret de Vos van Steenwijk all striving for Peace and the end of wars for the next generations.

At the same time there were also meetings of the WARP International Law Committee, who are studying on making the Declaration into a Legal Binding Document, which should be adopted by the UN in the end. And Religious leaders also sat together to concentrate on the articles 8 “Freedom of Religion” and 9 “Religion, ethnic identity and peace”

A very special Festival of the second annual commemoration of the WARP summit was organized at the Jamsil Olympic stadion, where over 100.000 people, mostly passionate young people from all over the country, were gathered together to underline the importance of peace throughout the world.

All foreign guests marched into the stadium like Olympic sporters waving flags and, each accompanied by a child, symbolizing the peace we want for our children. Lacking a national dress in the Netherlands, wearing an orange dress came nearest to that! One feels very small entering such a big stadion!

From 2pm till 8 pm a continious show was presented! What an atmosphere! Beginning with the passionate hundreds of youth who were screaming to us while entering the stadion. “Peace, Peace, we want peace”!

Among others we were presented with a gigantic International Youth Peace Group IYPG Card-Section Performance: “War and Peace”, depicting different stages of history of global and regional wars involving Korea. 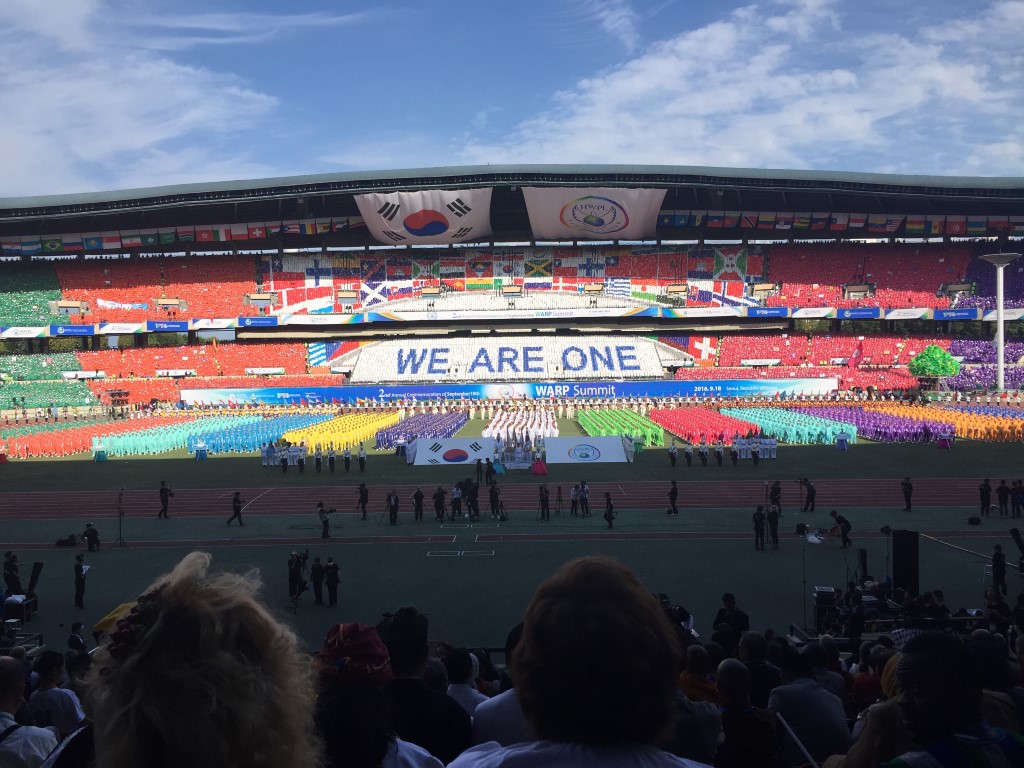 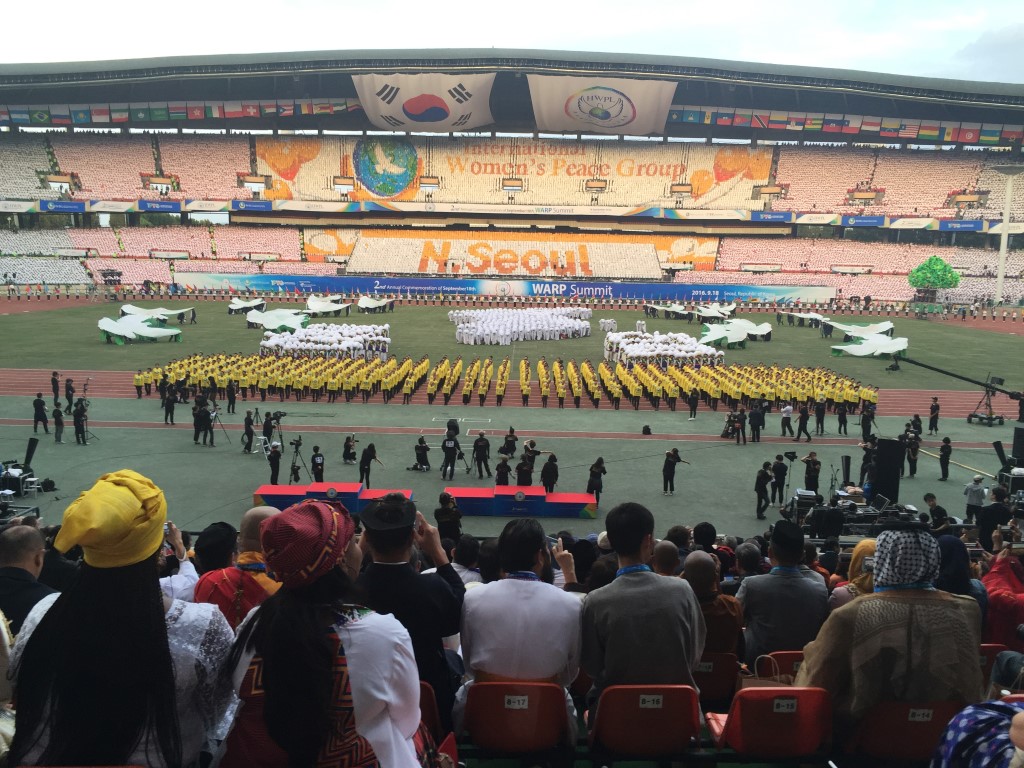 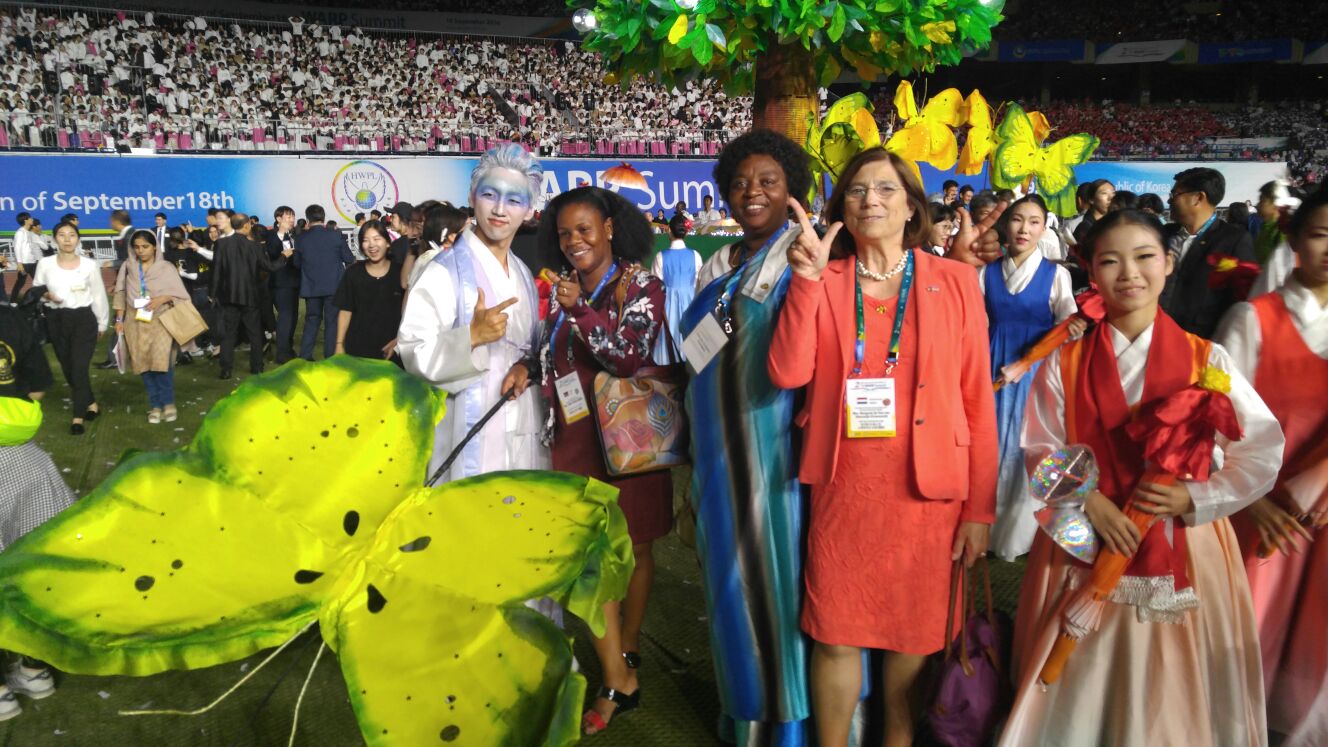 A World of Peace

On the last day we from IWPG, the women had our own conference, with a thousand attending. 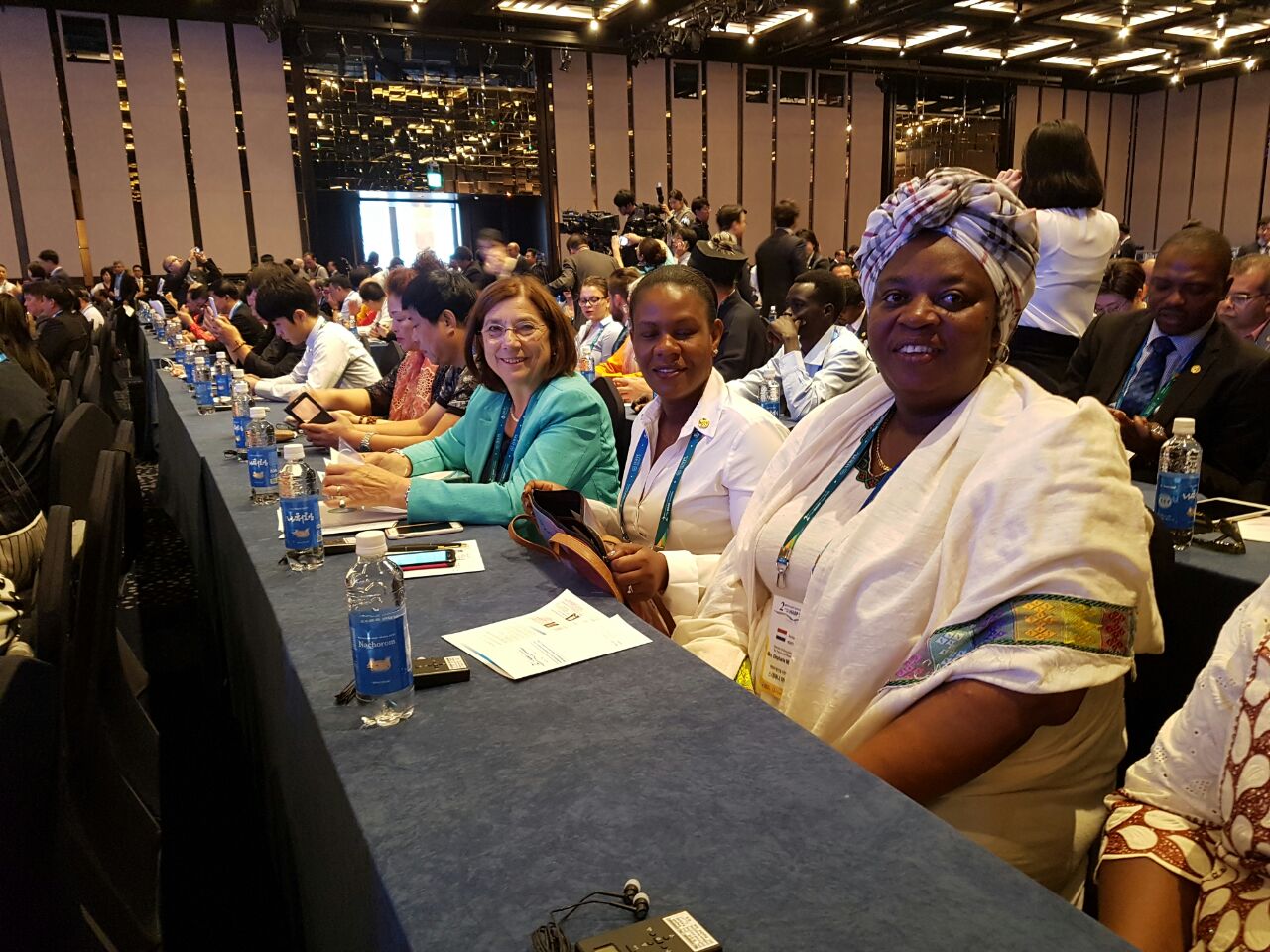 It was great to meet Stephanie Mbanzendore (on the right), living in the Netherlands since 10 years, she was the only other Dutch guest. She is Director of the Burundian Women for Peace and Development. And she wants peace in Burundi…

Parallel to the women there was a Youth Forum as well as a religious Forum, where religious leaders of all different beliefs spoke together, studying and comparing the different scriptures together and looking for ways to stop religious extremism in the world.

At the end of the three days Conference Margaret was appointed Peace Ambassador of IWPG. 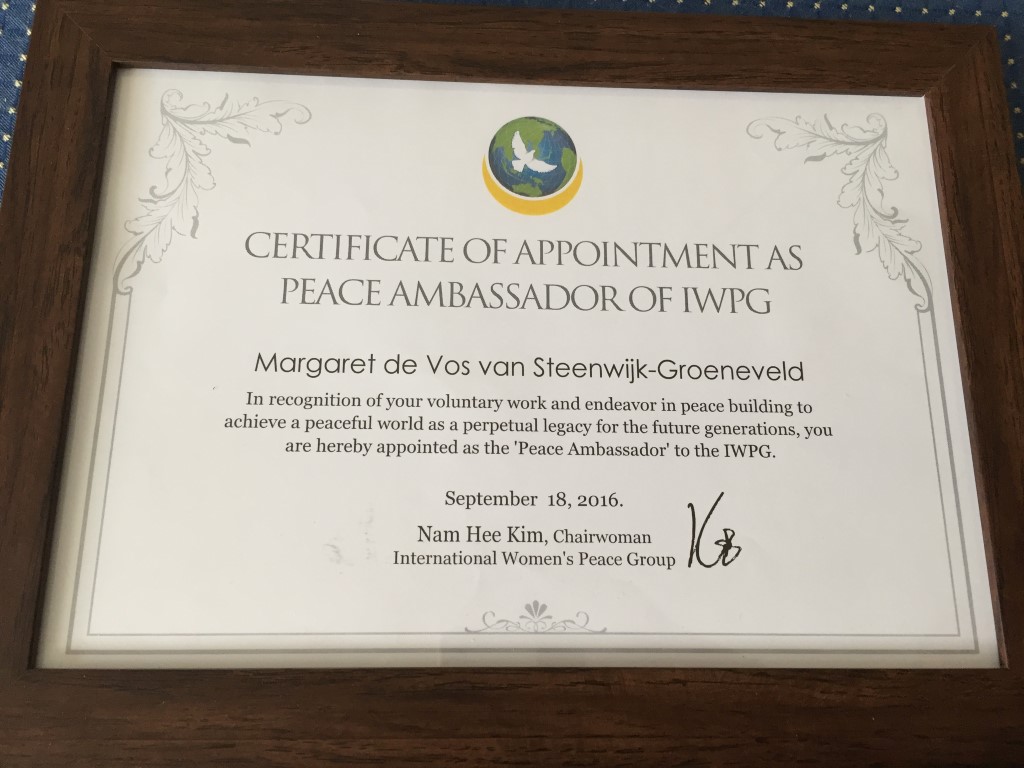