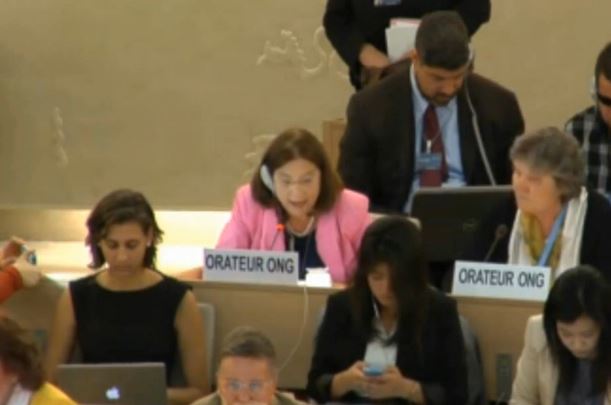 President of the International Network of Liberal Women (INLW), Margaret de Vos van Steenwijk, has delivered a joint LI-INLW statement to the 27th Session of the United Nations Human Rights Council on September 15th 2014. She stated that the Istanbul Convention on Preventing and Eliminating Violence against Women and Domestic Violence should be adopted in a Global Framework. Her text which was shortened when spoken is to be found under the link to the actual video of her oral statement.

The original non shortened message of the campaign which INLW and LI want the international community to hear is:

Liberal International and the International Network of Liberal Women would like to turn the attention of this Human Rights Council to the on-going violence against women and girls which continues to constitute one of the most wide-spread forms of human rights violations.

Domestic violence, female genital mutilation, honor killings, forced marriages and sexual violence especially at times of conflict are just some of the most horrific crimes committed against women on a daily basis. One in four women falls victim to such violence with irreparable consequences not only for her physical and mental health but also for her well-being and long-term personal development prospects.

Just several months back on the occasion of the 58th Session of the UN Commission on the Status of Women, the United Nations Special Rapporteur on Violence against Women, Her Excellency Ms. Rashida Manjoo, acknowledged that there are severe gaps within the current international normative framework in respect to preventing, eliminating and punishing violence against women.

Acknowledgement is certainly an important first step but acknowledgment alone is not going to save the lives of millions of women and girls who fall victims to senseless acts of violence simply because of their gender.

The Council of Europe and its 47 member states have resolved to reverse these continuing trends of violence by establishing the Istanbul Convention on the Prevention and Elimination of Violence against Women and Domestic Violence which entered into force on 1 August 2014.

It is currently the most far-reaching legally binding international instrument which provides practical measures for preventing violence, protects victims, prosecutes perpetrators and most importantly introduces an implementation monitoring mechanism.

As the only political international with an acting Human Rights Committee and a global network of human rights parliamentarians we have made a clear commitment before our membership and national parliaments around the globe that we will not only advocate for the universal ratification of the Convention but also work towards the extension of its jurisprudence on a global level. The latest LI Congress in Rotterdam adopted a resolution outlining specific steps to materialize these commitments into practice.

On behalf of all the member parties of Liberal International and the women of the International Network of Liberal Women from Africa, Asia, the Arab world, Europe, as well as North and South America we call on the United Nations Human Rights Council to adopt an all-encompassing global women rights legal framework to effectively eliminate and prevent all forms of domestic violence and violence against women and girls by incorporating the content of the Istanbul Convention, the UN Convention on the Elimination of All Forms of Discrimination against Women and all other relevant international legislation. Crucially, such a framework needs to provide an all-encompassing definition for domestic violence and violence against women, address violence against women both as a form of discrimination and a human rights violation, include a definition for gender thus applying a gender perspective in the design and evaluation of measures taken in its implementation and last but not least stipulate for a specific implementation monitoring mechanism.

It is time to not only acknowledge but also close the existing gaps in international women rights’ legislation. As liberals we have taken the lead and we are eager to build an international coalition which is why we are here today asking this very institution to follow. The severe gaps mentioned by Her Excellency Ms. Rashida Manjoo need to be closed now. We are offering a solution!