Many members of INLW including members of the Board attended the 70th Congress of LI in Andorra. Present were, Mireia Huerta, Silvia Flury (both left on Friday), Margaret de Vos van Steenwijk, Khadija El Morabit, Joaquima Alemany, Maysing Yang (who all left on Saturday morning), Ruth Richardson and Lysbeth van Valkenburg who both stayed till the end of the Congress. 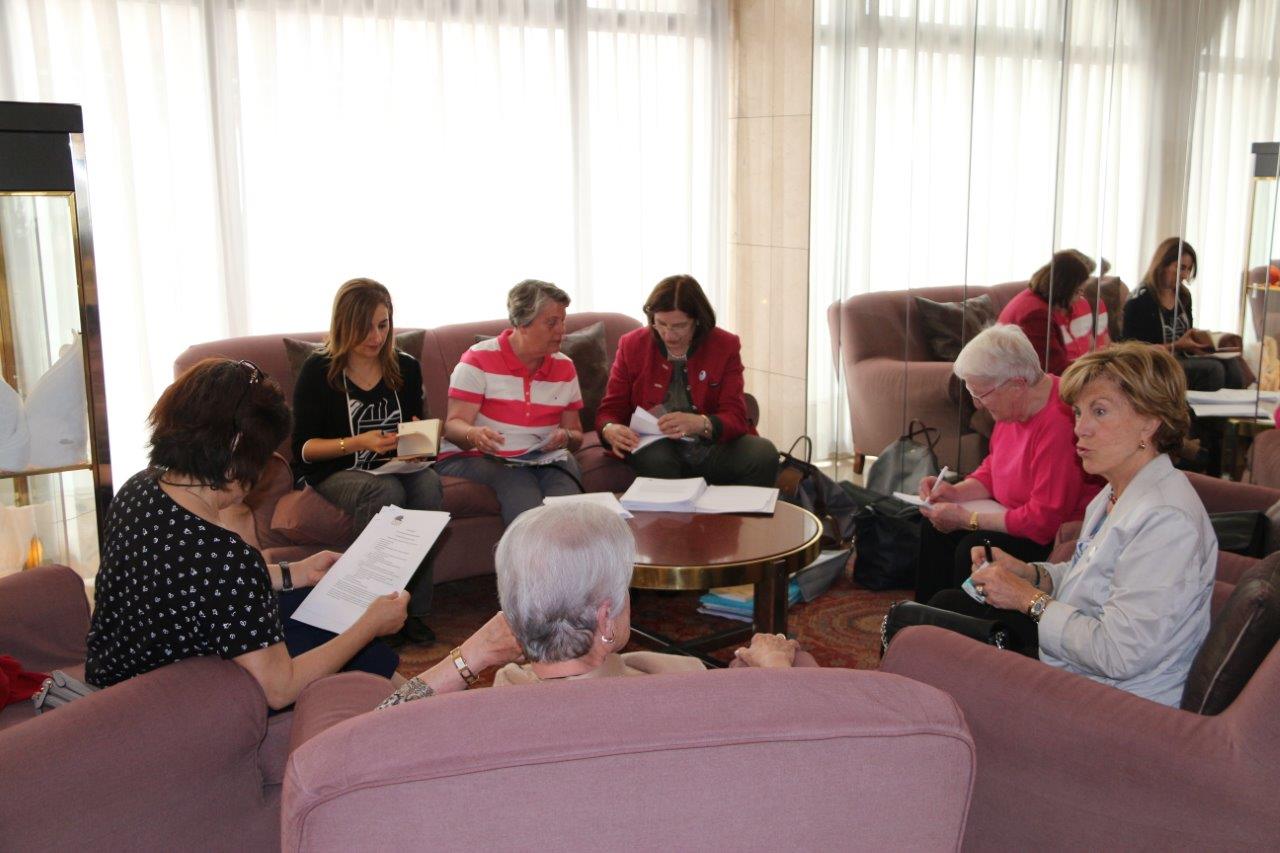 The main theme was the Liberal Manifesto 2017. During the past year the new LI Manifesto was written under the chairmanship of Professor Karl-Heinz Paqué, Deputy Chairman of

Friedrich Naumann Foundation for Freedom. INLW contributed at several moments during the past 1 ½ year to the content of the text.

On the first evening, there was a dinner hosted by the Catalan Group of Liberal International, where we could do a lot of networking. 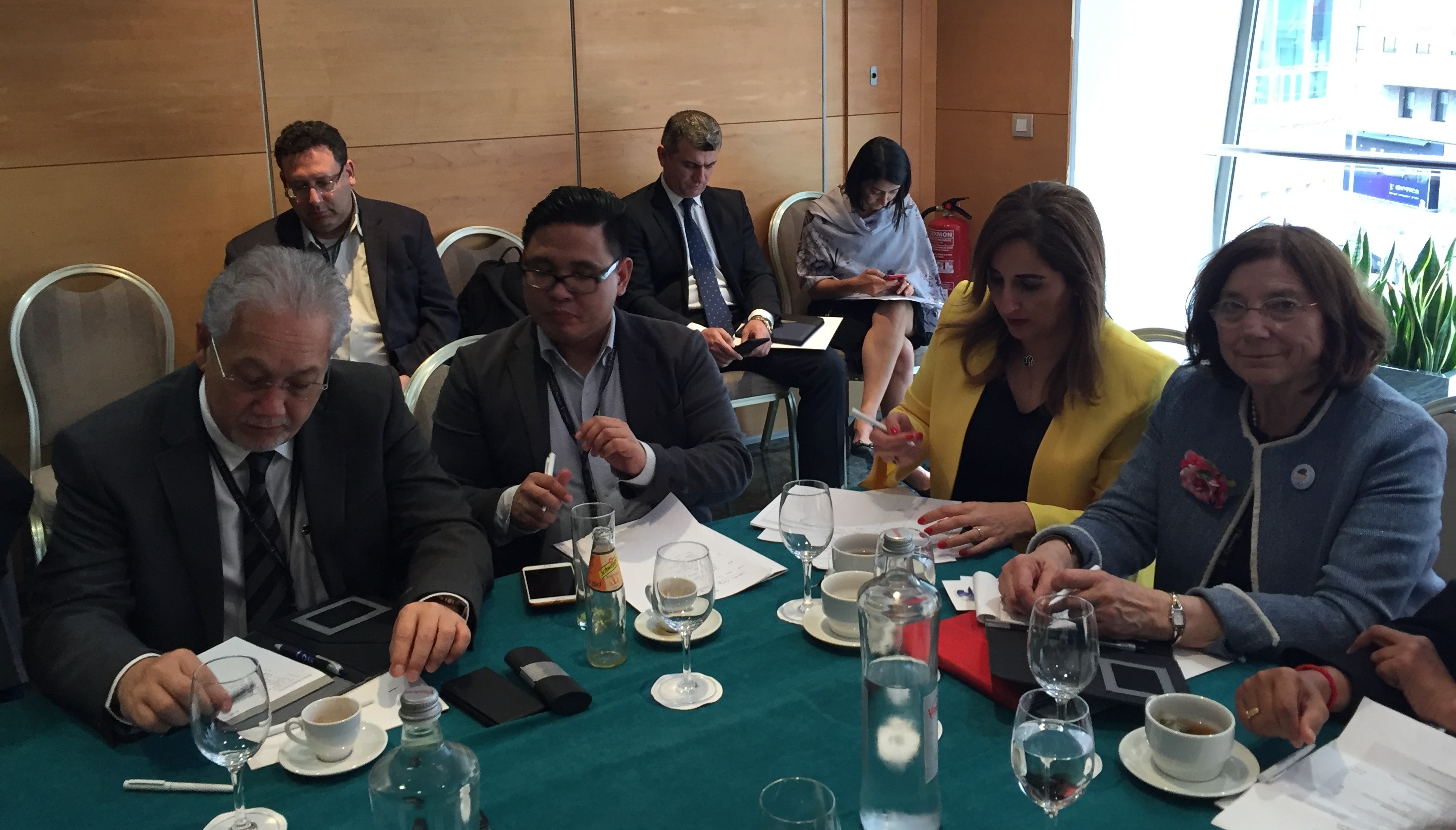 de Vos and Khadija El Morabit participated at the meeting of Regional organizations, such as ALDE party, the Arab Liberal Federation (ALF), the African Liberal Network (ALN) and the Council of Asian Liberals and Democrats (CALD) and Red Liberal de América de América Latino (Relial), where we suggested that there should be more cooperation between for instance INLW and the different regional liberal federations. It was decided to follow this up. The first action thereto will be that Margaret de Vos van Steenwijk will attend the next CALD women’s Caucus Congress in Taipei in August 2017.

members to be elected for the LI Bureau gave their introductions in the morning, among the candidates was our Deputy President Hakima El Haité. She gave an inspiring and clear speech on the position of Liberal International; the importance of the Environment for our future and the actions we have to take as Liberals!

During the Friday afternoon, the final discussion was held about the Manifesto and its local perspective. Also, the proposed amendments to the Resolutions were discussed in working groups. The INLW resolutions were amended and adopted to be accepted in the General Meeting on Saturday. 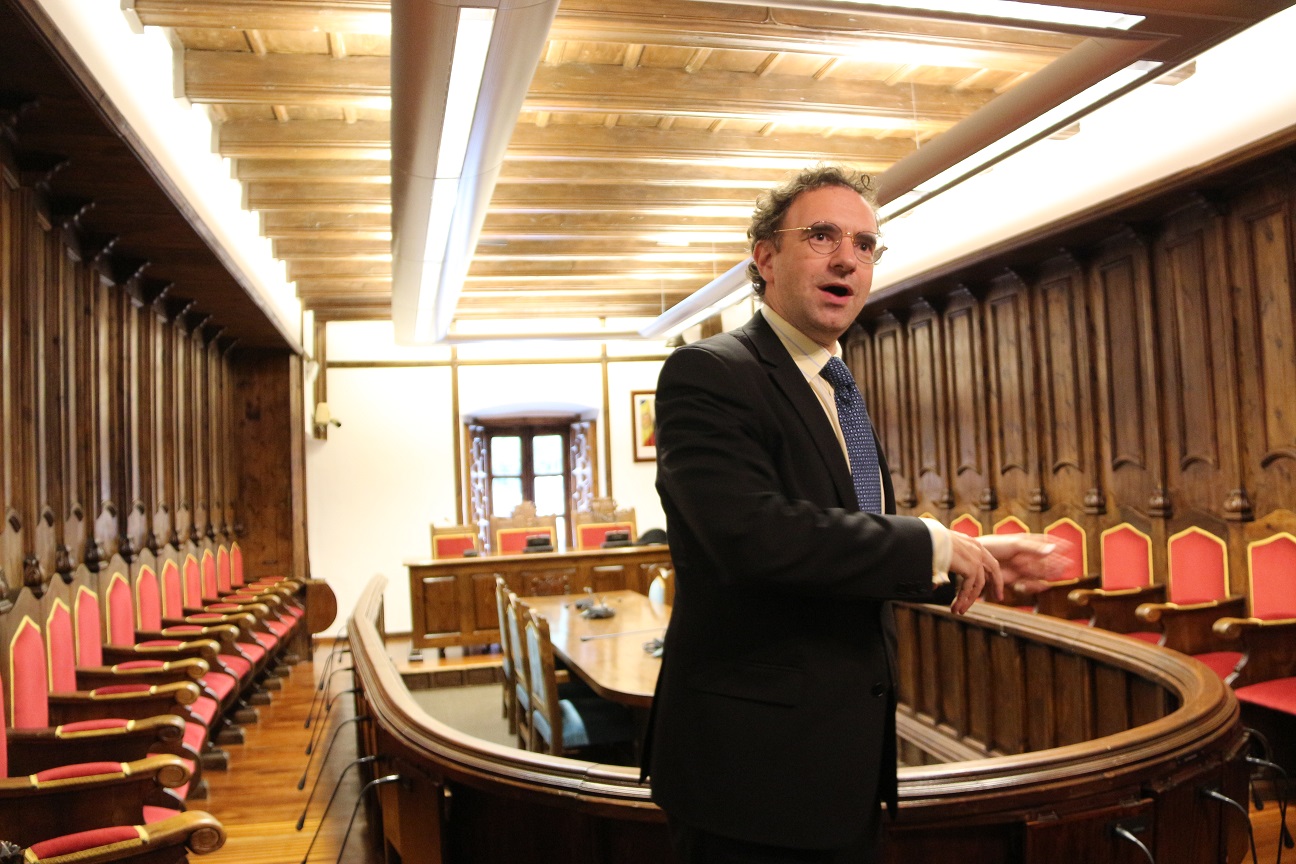 In the evening, the Group paid a visit to the Andorran Parliament, the Casa de la Vall, which is the historic “Old 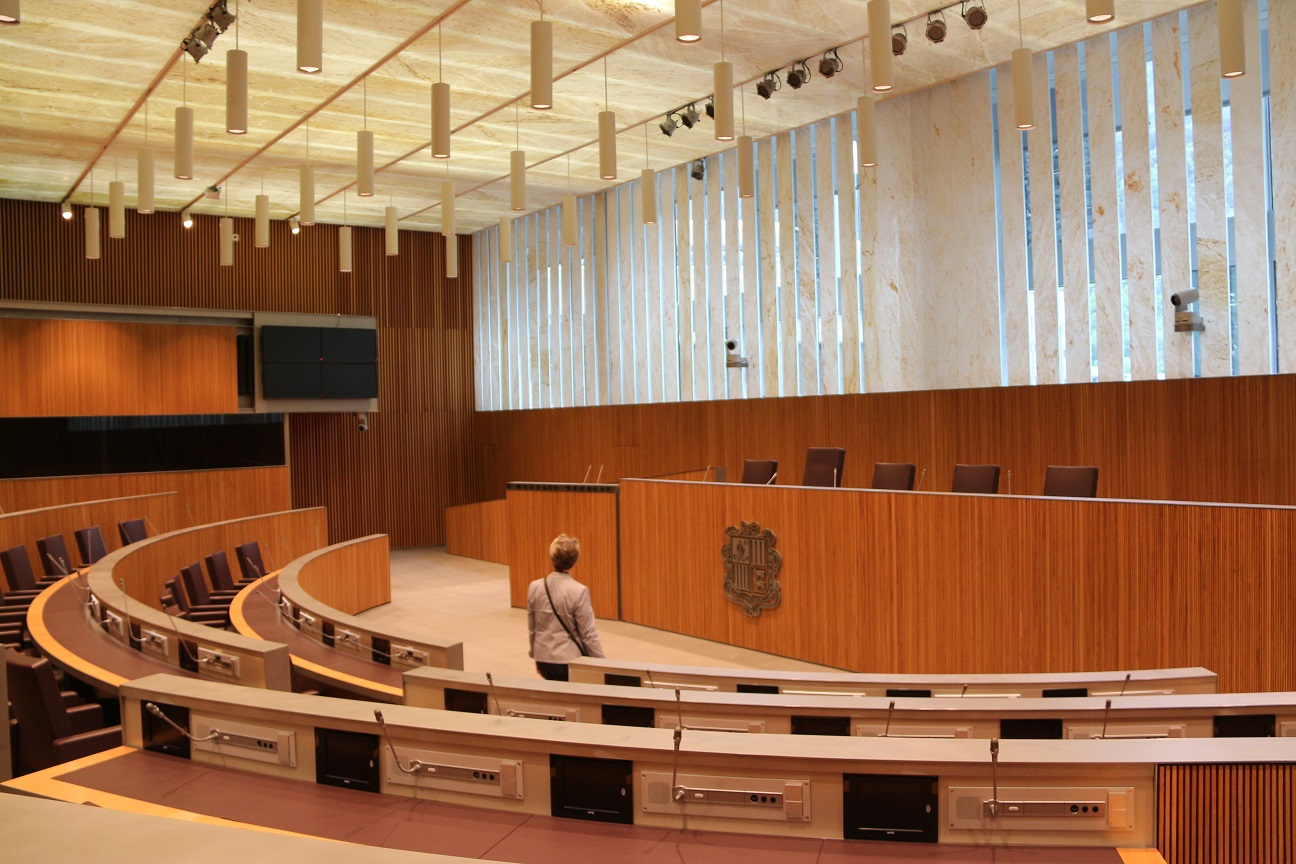 Mr Zamora, Josep Forné, MP, President of the Andorran Liberal Parliamentary Group and Mrs. Carine Montaner, MP. We were given a charming performance of a Andorran dancing group. 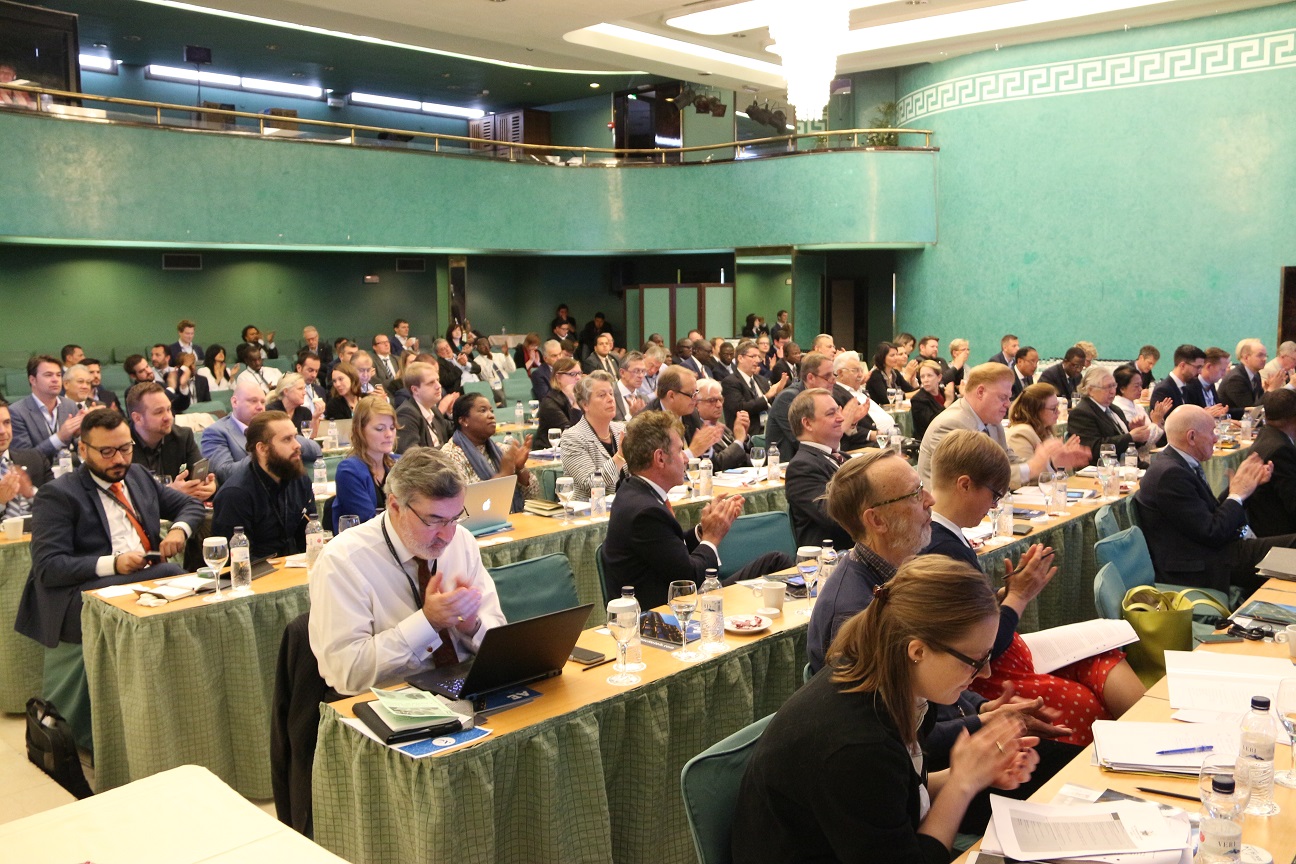 On Saturday during the day several working sessions were held on “Liberalism in the 21st century”; “How to make liberals win again” and “Migration and Economic integration: How to open borders”.

the Congress was closed with the adoption of the historic Liberal Manifesto with the signing ceremony of the LI Manifesto! INLW was represented on stage by the Treasurer Lysbeth van Valkenburg.

The farewell dinner was hosted by the Liberal Party of Andorra with a desert of an enormous 70th Birthday cake! 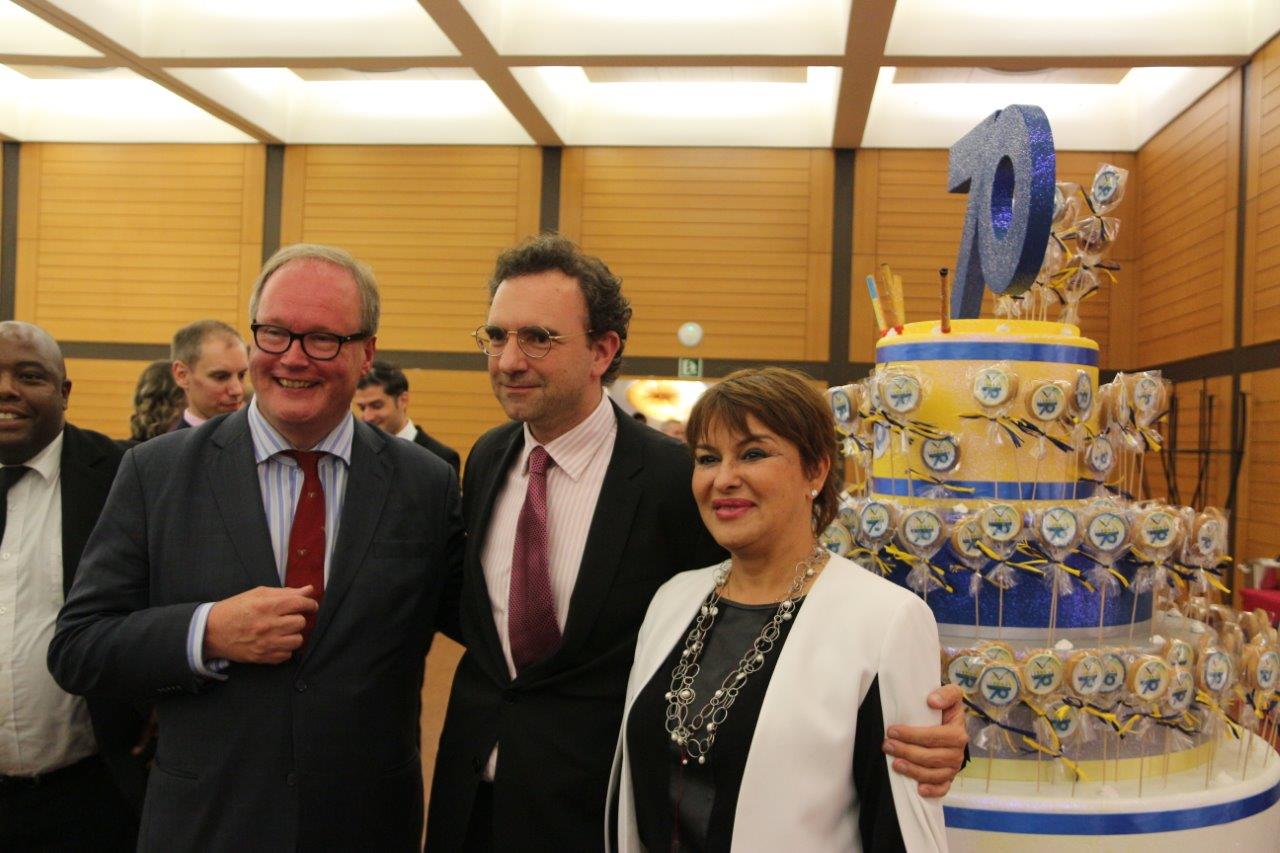 Many INLW members participated at the 59th LI 59th Congress, April 2014 in Rotterdam

Thursday April 24th from 1.30 till 3.30 INLW held its statuary General Meeting with INLW members in the Manhatten Hotel.

On the evening of Thursday May 24th INLW organized “MEET and GREET Drinks” in Café Restaurant Floor.

END_OF_DOCUMENT_TOKEN_TO_BE_REPLACED 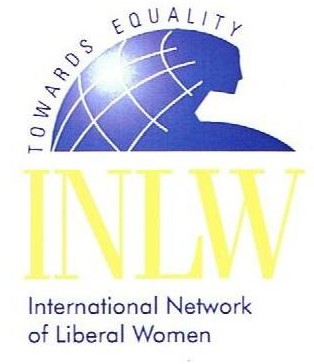 INLW had submitted a
resolution to the 59th LI congress in Rotterdam on the Istanbul Convention calling liberal parties party to the Council of Europe to press on their governments to sign, ratify and implement this very important Convention on preventing and combating violence against women.

Liberal parties from outside the Council of EU should urge their governments to introduce into their own legislation the content of the provisions of the Istanbul Convention.

Furthermore LI now calls upon all governments to work towards a worldwide UN Convention on preventing and combating violence against women taking the CEDAW as a possible model. By signing, ratifying and finally implementing this still utopian Convention, preventing and combating violence against women will form an integral part of every government policy world wide. And that is our aim!

The resolution was unanimously adopted by the Liberal International Congress on May 26th.

It is the intention of INLW together with ALDE GEN to launch a campaign on this subject. Cooperation of all involved is called for! 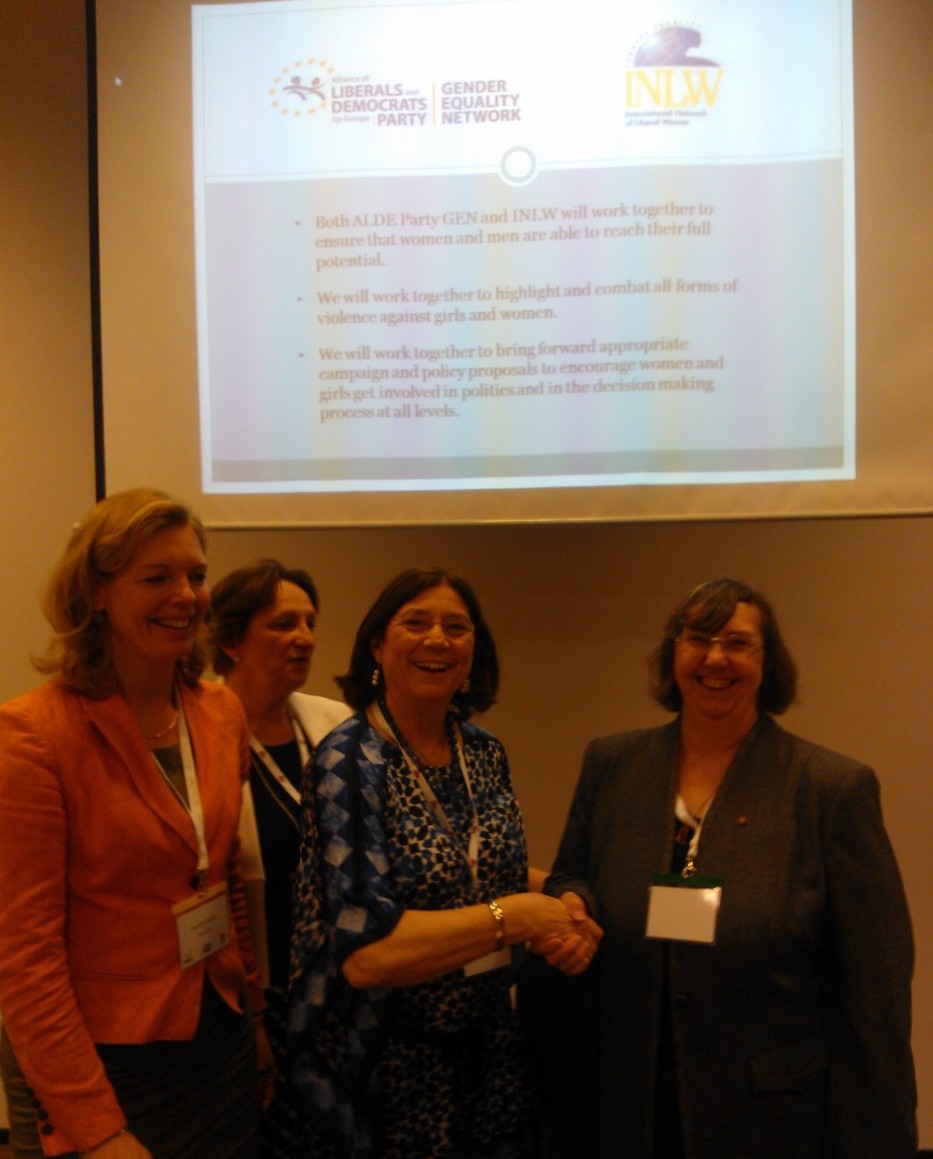 Ingrid de Caluwé and Marianne Kallen are pleased to see Margaret de Vos van Steenwijk President of INLW and Flo Clucas, President of ALDE GEN shake hands with each other on the occassion of the launching of the partnership between INLW and ALDE GEN. Behind them are stated goals for the partnership.

In the last part of the Fringe Meeting  INLW and ALDE GEN officially announced their decision to become partners. In working close together both organizations will be able to strengthen each other. 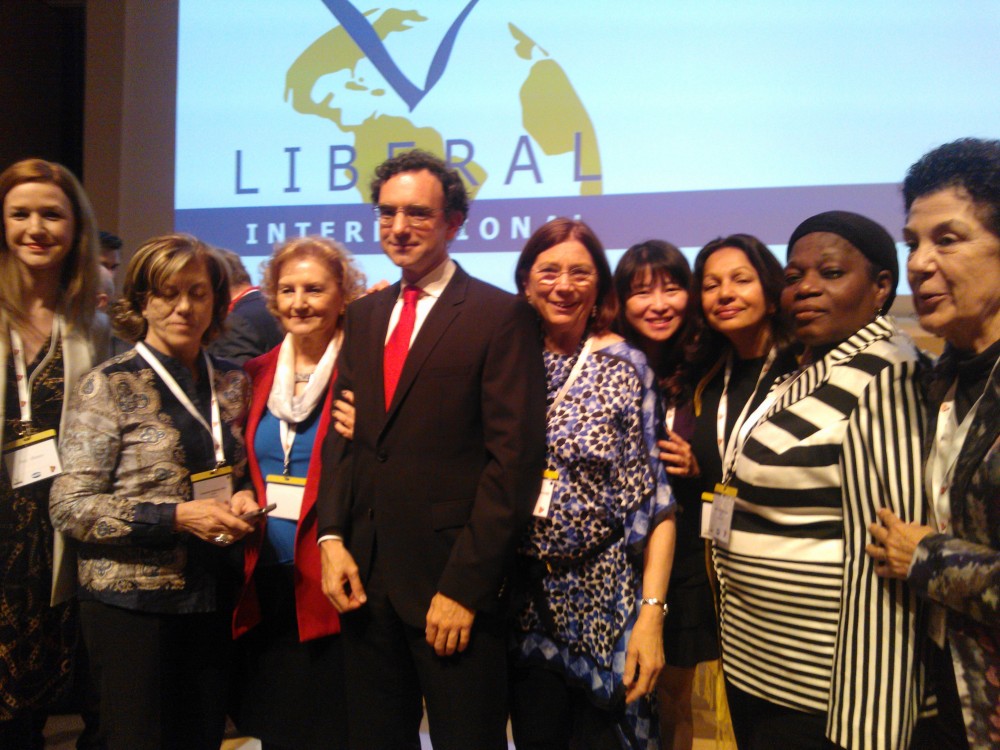 The Board of INLW knows Juli Minoves well as he has always been a staunch supporter of INLW and its work for gender equality and women’s human rights.

MEET AND GREET DRINKS for Liberal International Congress participants and INLW and Womens Network of VVD. Dutch liberals want to meet the members of the Liberal International family and vice versa. So after the harbor tour, come and join us all for drinks in Restaurant Floor. If you feel like dinner by that time you will able to get some dinner at this restaurant at that time as well.

INLW will participate with a number of her members in this LI Congress. The theme of the congress is “Enhancing Global Trade”. Therefore we chose to follow the theme at our Fringe Meeting which we will be able to hold on Saturday 26th April at 9 am in the Doelen, the congress venue . The theme of this INLW “Morning Debate on Global Trade and Women”. Different aspects will be covered and we hope to have a good discussion using predetermined statements.