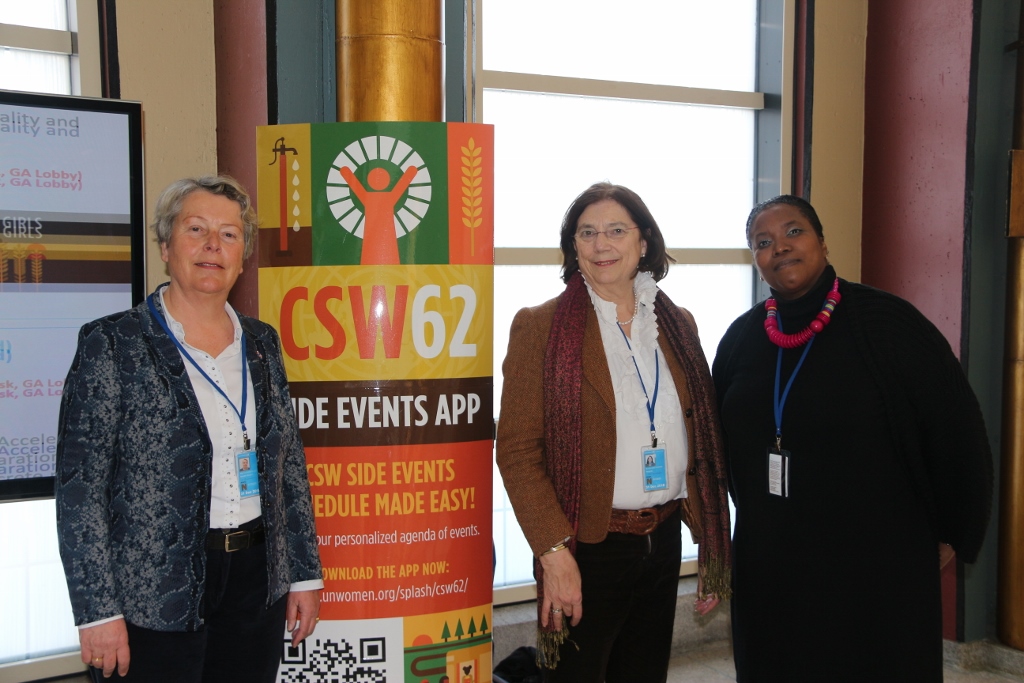 This year the UN CSW was set with the title “Challenges and opportunities in achieving gender equality and the empowerment of rural women and girls”. 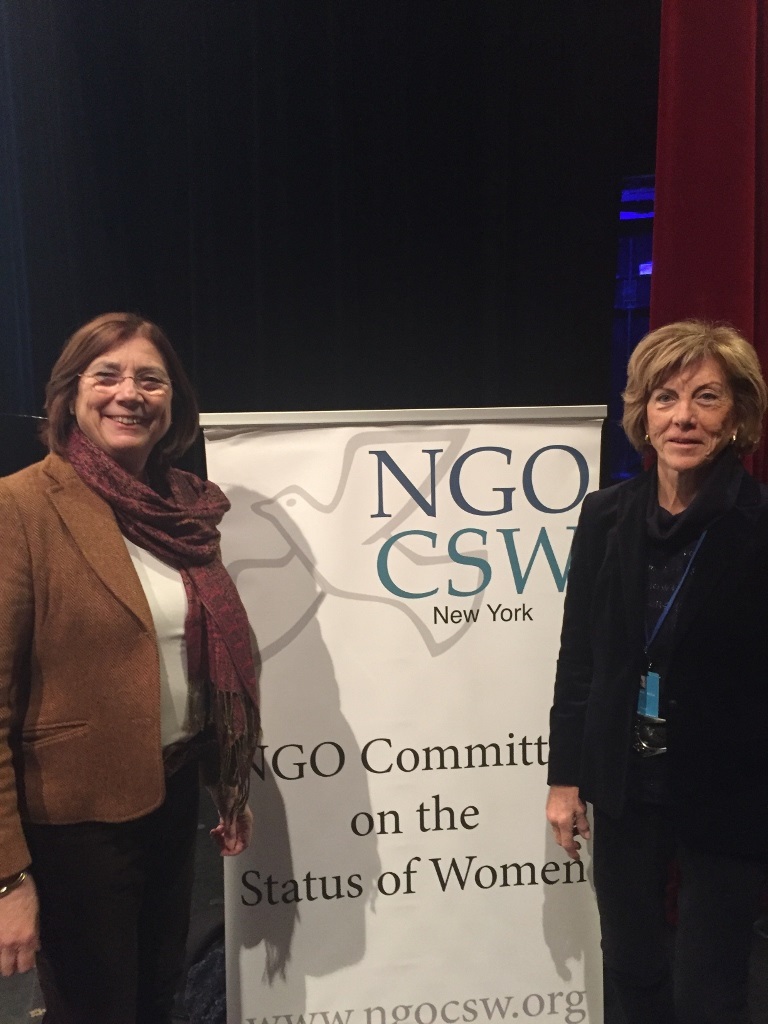 Several members of our INLW board were present. Margaret de Vos, Lysbeth van Valkenburg and Ruth Richardson were present during the opening ceremony, as well as Joaquima Alemany.

The new Chair, Ms Geraldine Byrne Nason (from Ireland) opened the 62nd CSW. She stated: “I am proud to be here in St Patrick’s week. We must promote the instruments to help girls in rural areas. I know from my own home country, Ireland, that especially women and girls can help build peace and help development in the rural parts. Girls and women must come to the decision-making table, we must leave no one behind and work on this for 2020!”. A quote from Irish Murdoch: “I think being a woman is being Irish, you are nice but second place”. 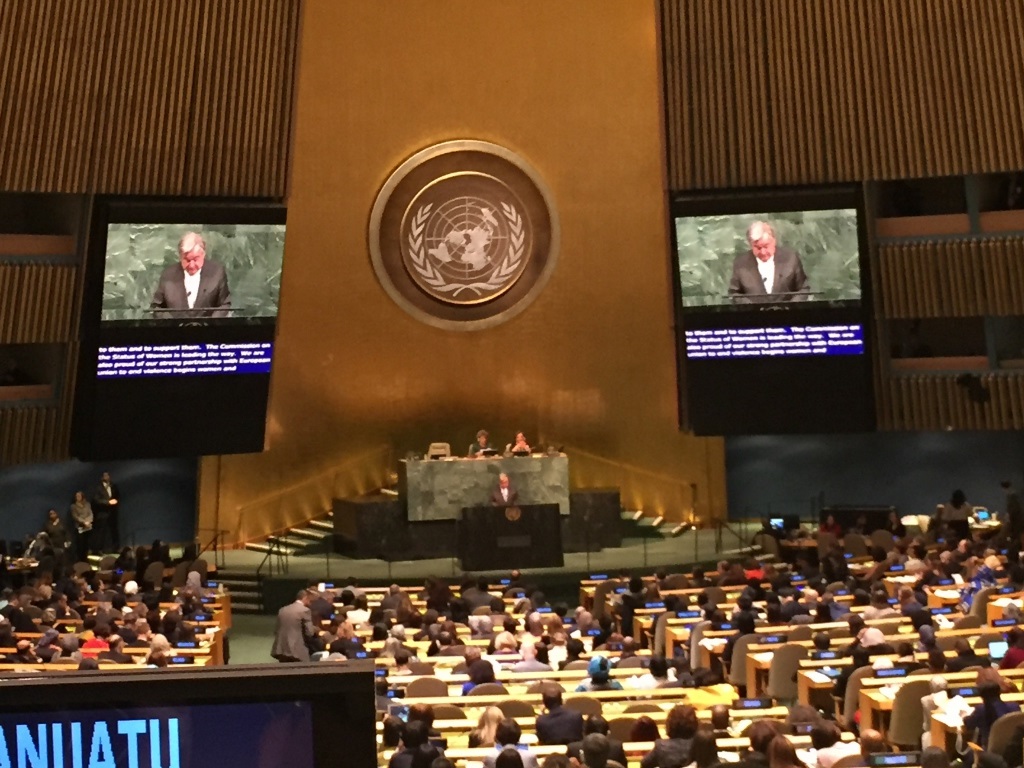 Ending of discrimination is one of the main points, all men should recognize gender equality and we must all work on that together. The discussion on “Me Too” has helped the awareness and has resulted in more acceptance of gender equality and in more stopping of violence against women, which has been stipulated in laws, but these must also be implemented. Measures and legislation must be extended to the new possibilities of the Internet as much violence is on-line nowadays. 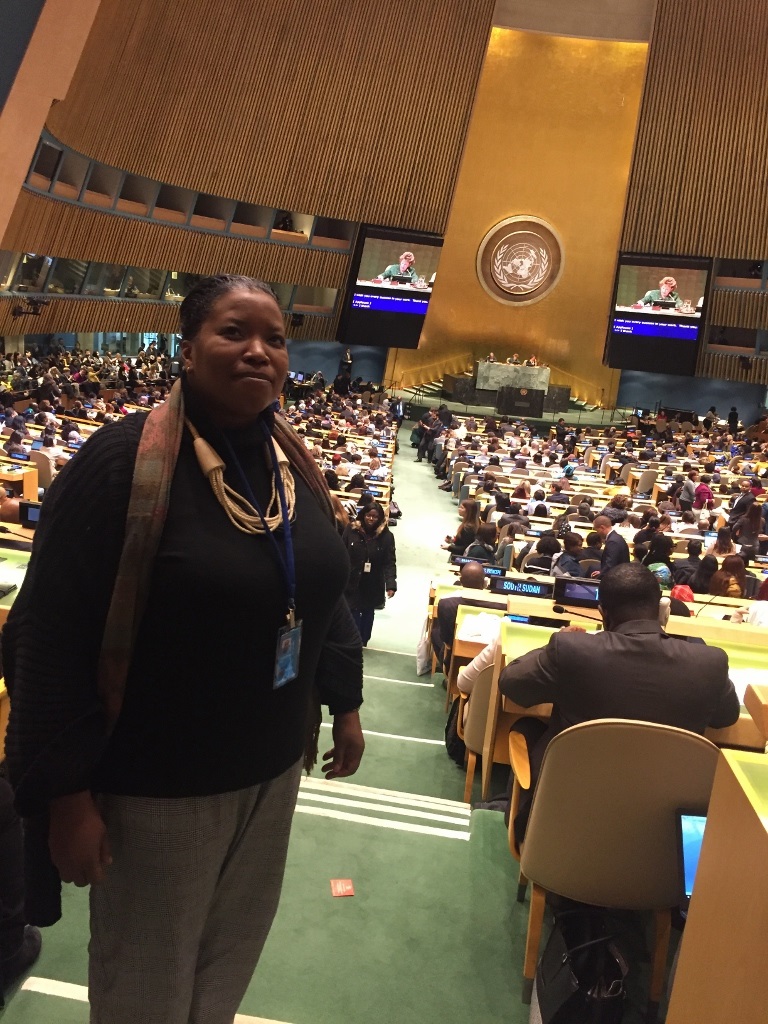 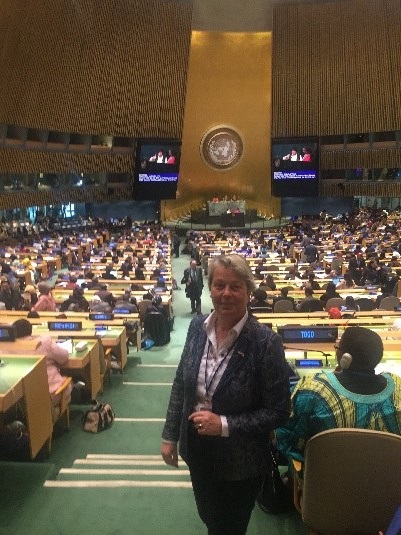 Hereafter the Secretary General, António Manuel de Oliveira Guterres, from Portugal committed himself to the fight against gender inequality and to promoting women in important decision-making positions.

After the general opening all the various workshops and parallel events started. One of the themes was; the Division of care and work in a European perspective: what works and what can be improved?

First, women should not feel guilty about working, in any situation it is a good thing to have men and women working together. So, it must be part of any business to mix your workers and try to get a balance with men and women present.

What is seen all over the world is that women choose to take up the maternity leave and most of them are not prepared to share this leave year with their partners (often seen in the Northern countries such as Denmark and Sweden). In the USA women very often choose to work less once they have children and there is also a trend for women to choose older men. In many countries the childcare is paid for by the government that makes it easier for some women to work fulltime.

Also, role models can show that a fulltime job is possible while still being a good mother. Employers must help to find solutions when women are working fulltime, it must no longer be the problem for women it must be a general problem for all people who are working whether they are a man or a woman, with or without children. The responsibility lies with the employer and the employee and society in general to get a different attitude towards work. 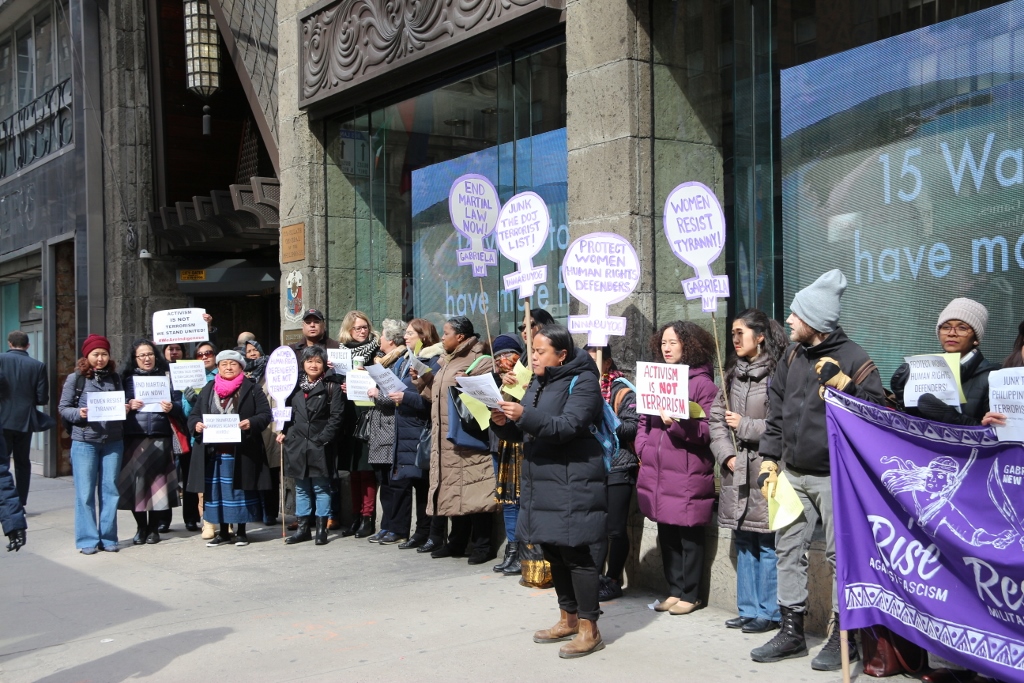 In rural areas we also find that many women work on their partner’s farm or business and often are not paid and certainly not seen as employee with all the insurances that are normal for working people. So, when the partner suddenly dies these women very often are suddenly destitute because no one has ever considered what to do with their position and input as partners in the business. Here the problem is mostly not how to get childcare and work combined but much more how to be a real and important recognized worker for the business. And how to get ownership as a woman.

In any of these situations the attitude towards working women being an asset to any work and a valuable partner for a business, is still very often not appreciated positively enough. Men and women must work on that together.

During the week there were many interesting events that we followed. We were asked to support a rally for Women Human Right Defenders from the Philippines for international solidarity towards  their defenders who are seen as terrorists. Often, they are thrown into prison.

With the slogan” Activism is not terrorism” we supported them during the morning in the freezing cold of New York at the Philippine embassy on 5th Avenue. 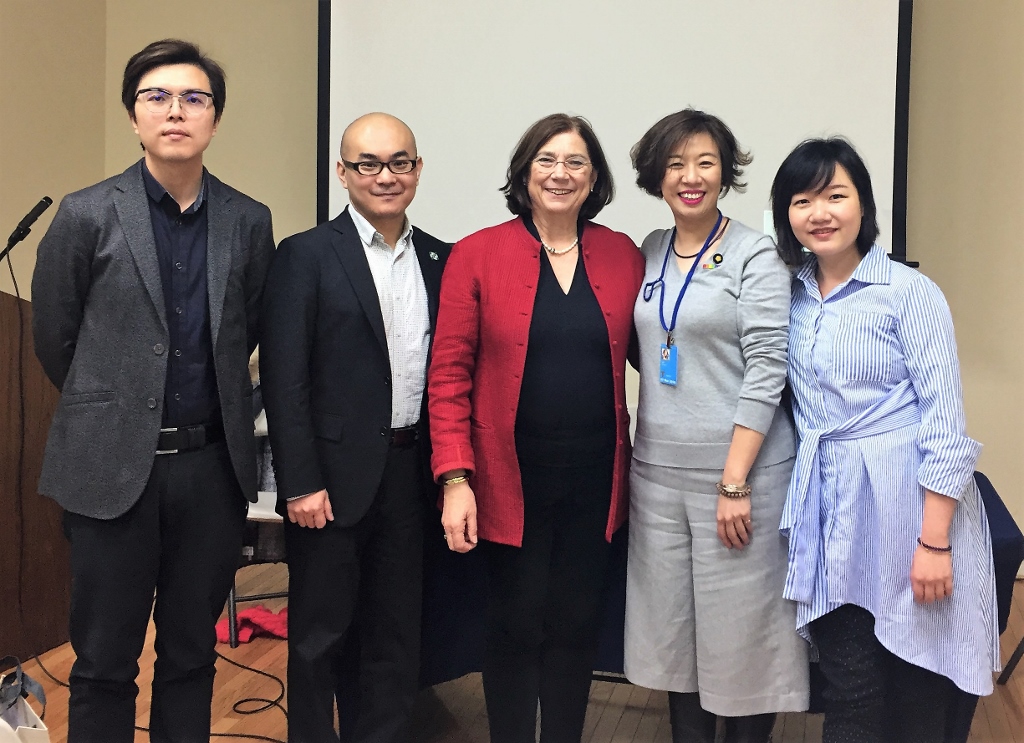 Our president, Margaret de Vos, was one of the speakers during the event of the Taiwan mobility research centre about “How do women make cities smarter” and women’s political empowerment in this perspective. (read more in the separate article)

Liberal International, the National Democratic Institute and INLW together organised an event about “Pushing back: strategies for combatting violence against women in politics”.  (read separate article).

Liberal International president Juli Minoves and the UN special rapporteur were both speakers during this session. Denise Robinson MP from South Africa, Democratic Alliance spoke on behalf of INLW. 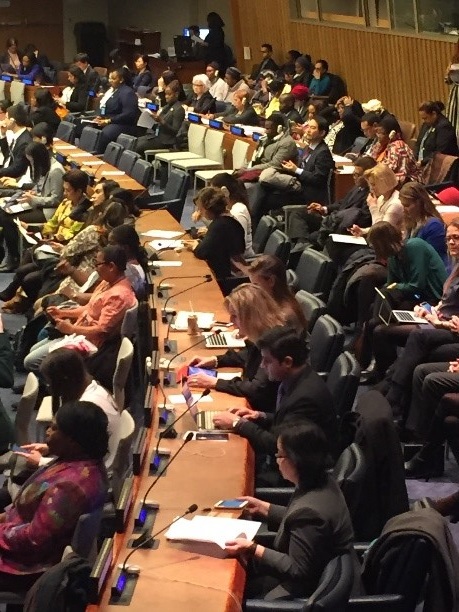 Overall, we are relatively positive about the results. We are happy to note that they agreed on the importance of the Beijing Declaration and also the implementation of the 2030 agenda for Sustainable Development as well as the Paris Climate Change Agreement on the actions that have to be taken to address Climate Change all in relation to the importance of these agreements for the position of women and girls.

In paragraph 29 the Commission stresses the need to recognize measures to reduce and retribute household work and domestic responsibilities must be adjusted between women and men and boys and girls. This is also a prerequisite for equal education between boys and girls.

In paragraph 35 the Commission stresses the importance of having women and girls in political and other civil society decision making positions.

In the paragraphs d and e on strengthening legal frameworks, they advise on reforms for realizing legislation on land rights, registration and title certification for women regardless of their marital status.

There was less animosity then in other years which resulted in all countries signing the agreed conclusions. (read more). Speech of Jacqueline Prins (read more) 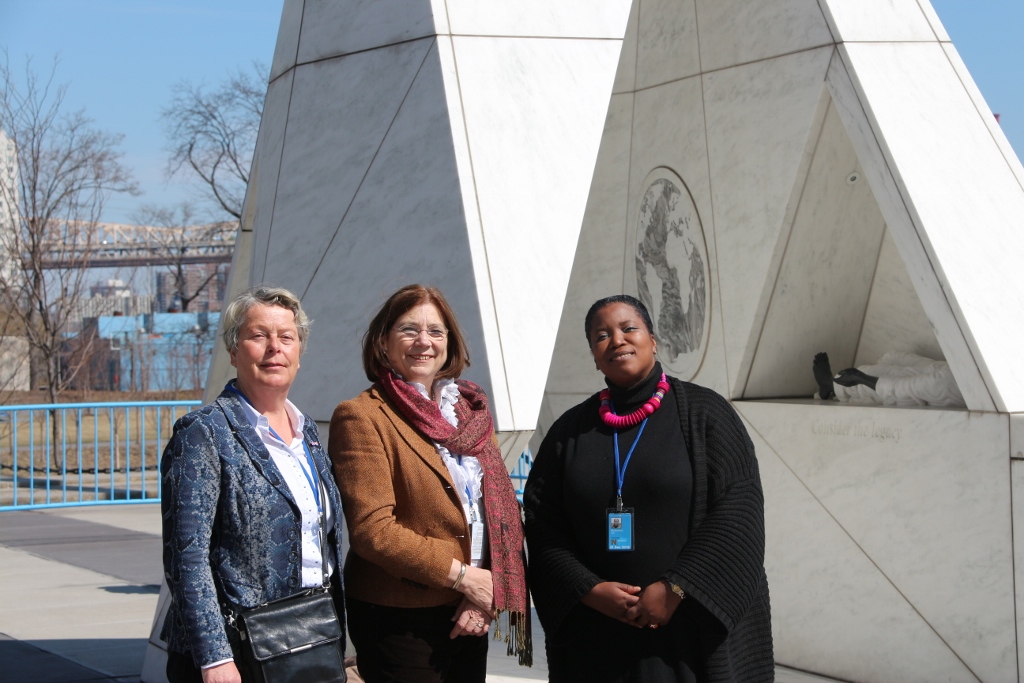