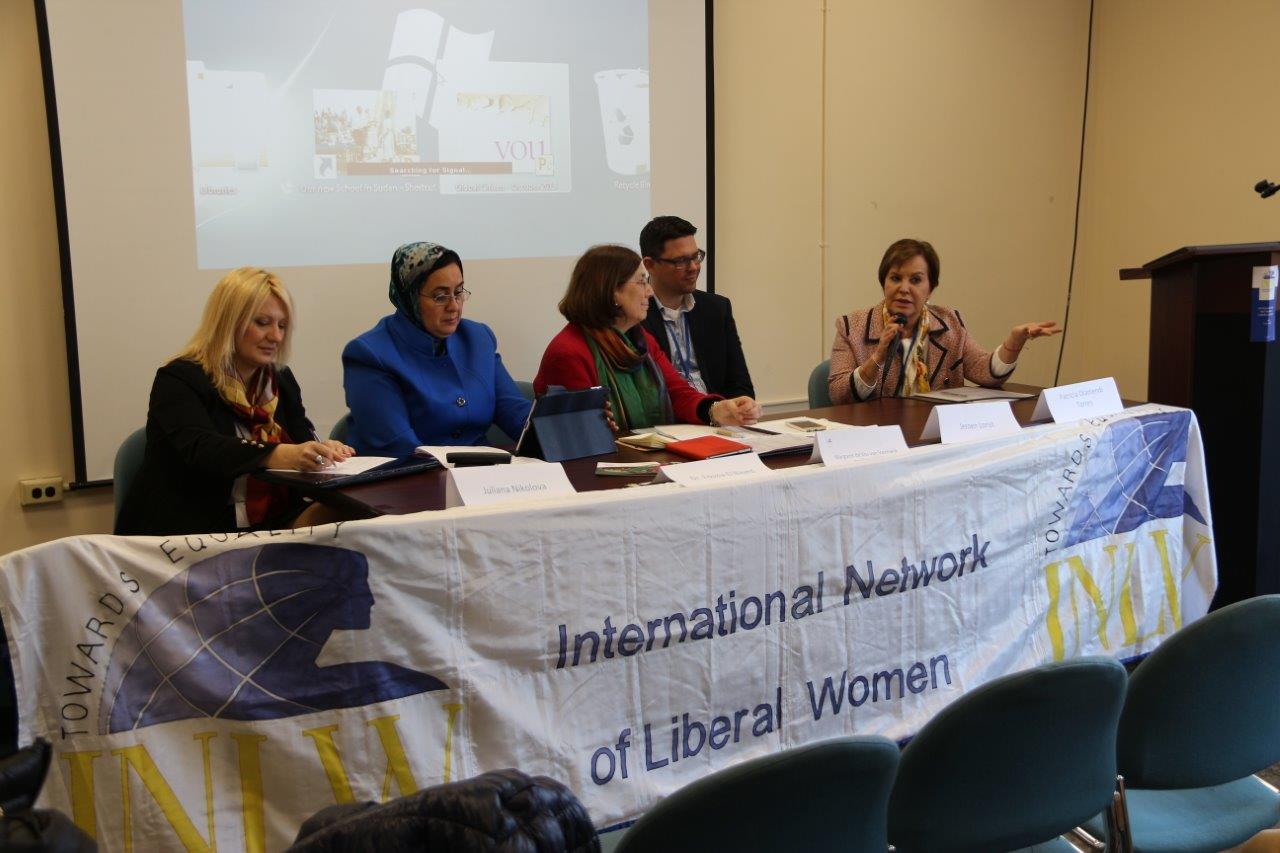 Panel discussion at 60th CSW UN in New York on 22nd March 2016 on:
From the Istanbul Convention to Implementation
Addressing violence against women with different approaches and different levels

The event was organized by INLW, Rutgers, UN watch and Liberal International. 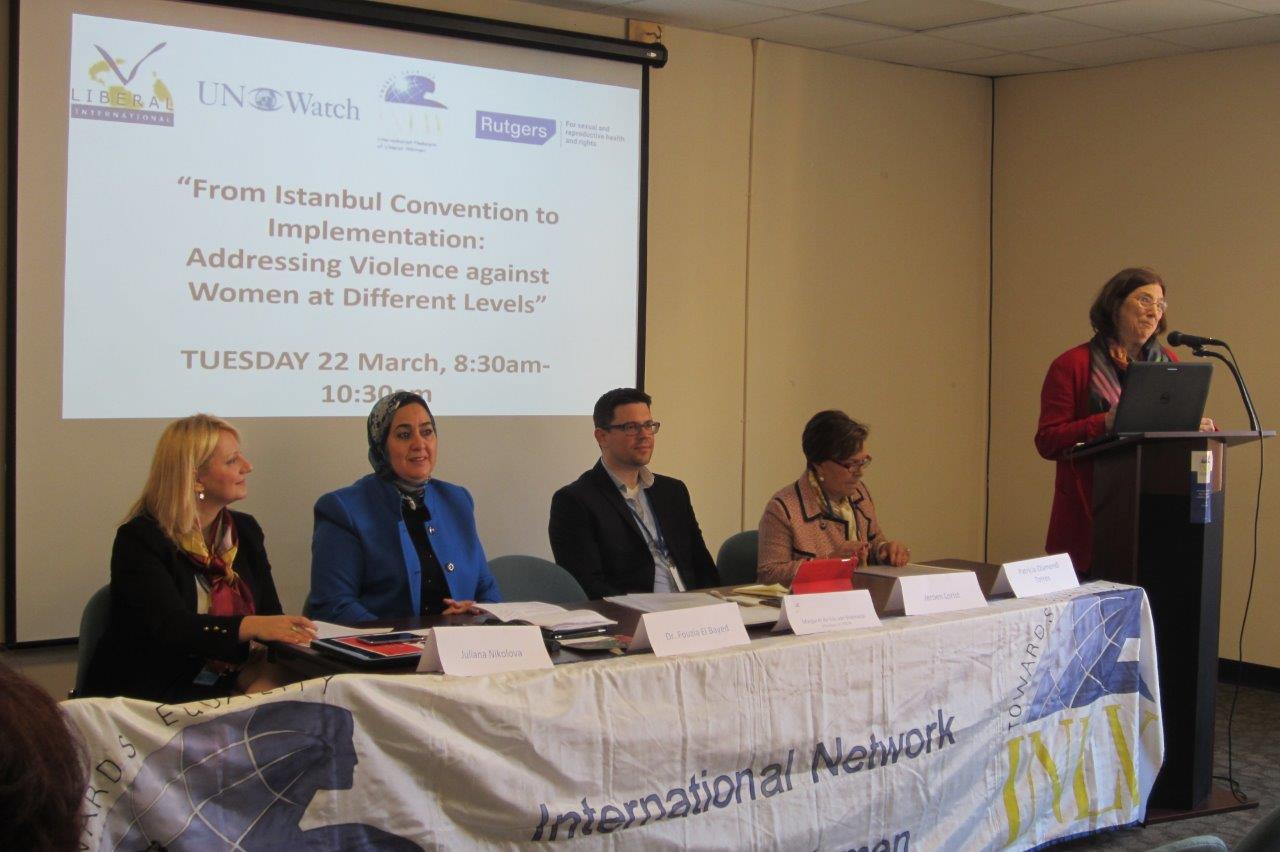 Margaret de Vos van Steenwijk, President of INLW, was the chair during the discussion. 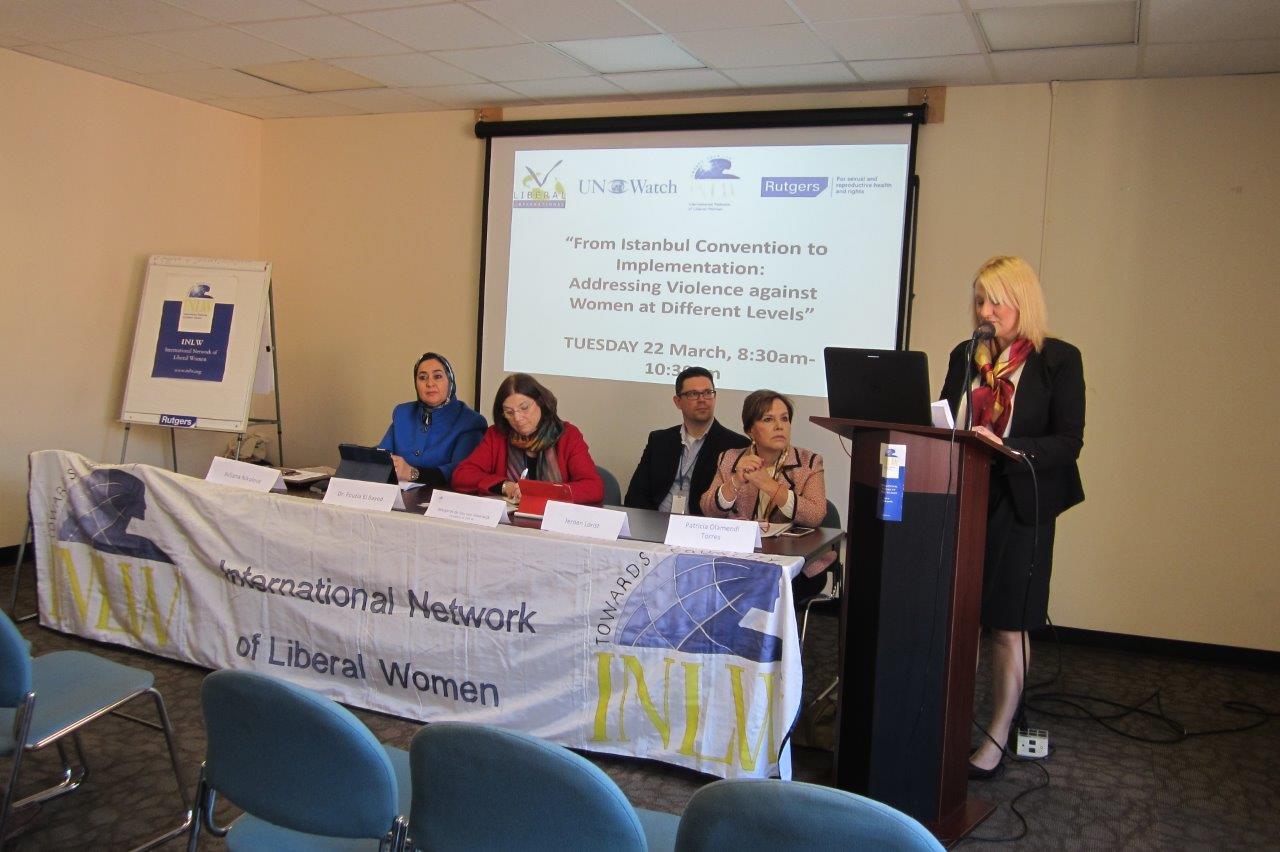 Juliana Nikolova from Liberal Party of Macedonia stressed the importance of the protection of all women, moreover gender equality should be accepted on an international level. “There is no excuse for my country not to sign and ratify the Istanbul Convention. The Liberal Party will go on campaigning to this end, because violence against women and girls and domestic violence should fall under an international legally binding instrument.”Read the speech of Juliana Niklova (docx) 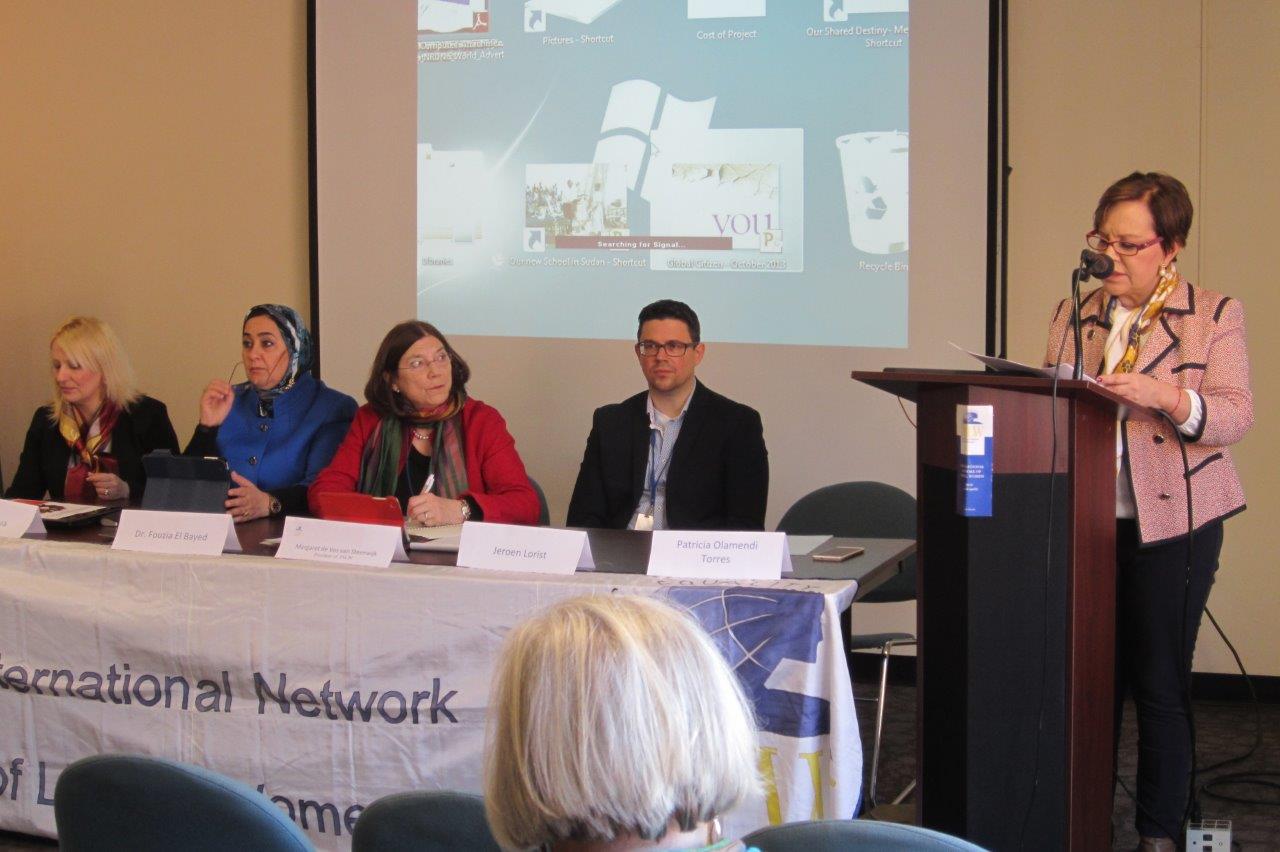 Patricia Olamendi is consultant for the US Women and Human Rights. She is from Mexico. She gave us an insight in the amount of violence against women in her country. Seven women die every day in Mexico due to violence! The Inter-American Convention (1994) on violence against women is a beginning for legislation, “but an International instrument such as a globalized Istanbul Convention is necessary in the Latin American countries to get solid implementation. That will be the only way to make a real difference in the future”. Read the speech of Patrcia Olemandi (docx) 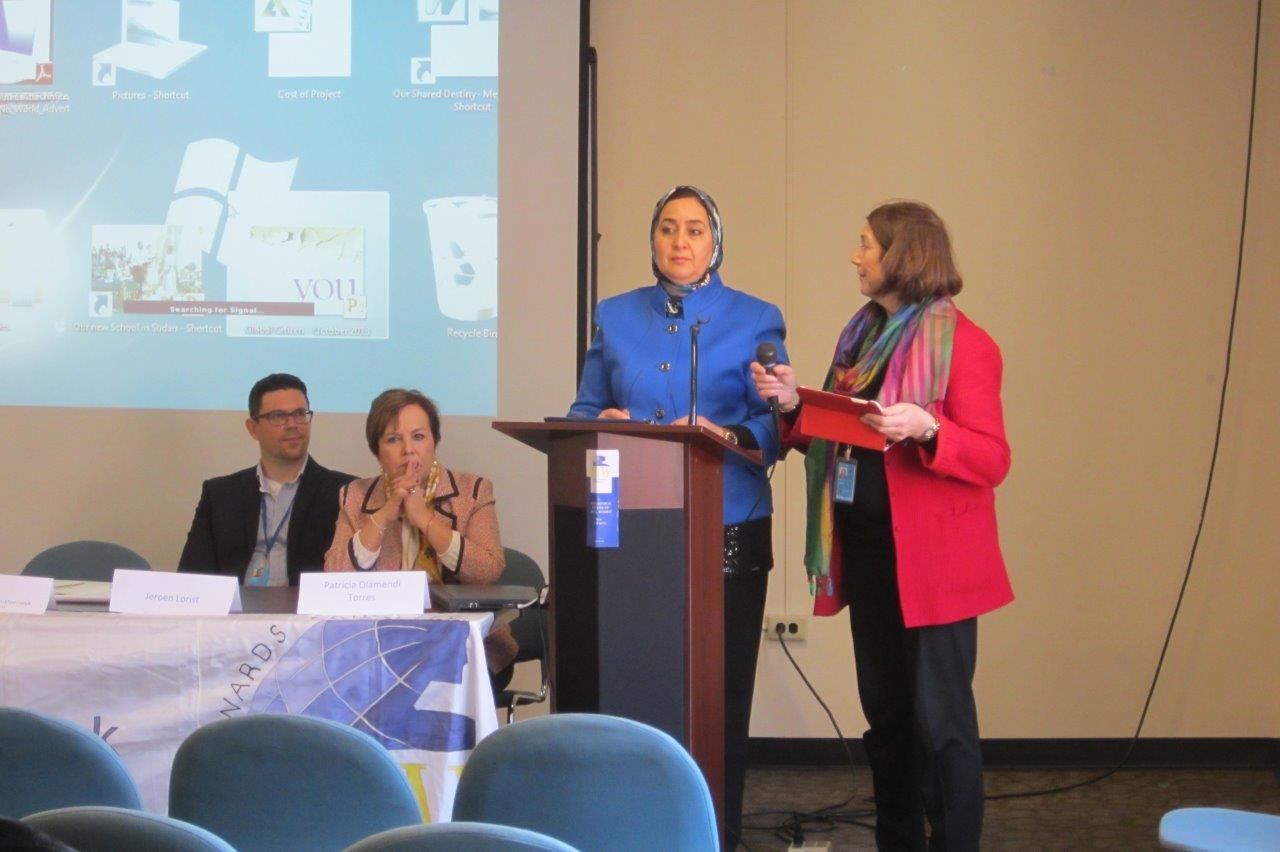 Fouzia El Bayed is Member of Parliament for Constitutional Union Party in Morocco. After the Constitution change of 2011 all laws are gradually being adapted to conform to the Istanbul Conventions. Even the programs at school are rewritten. Fouzia is as member of the Arab Women Parliamentarians Network of Equality. “I have started a commission to prepare a similar document to the Istanbul Convention for the Arab world. This is done with seventeen other Arab countries”. Read the speech of  Fouzia El Bayed (docx) 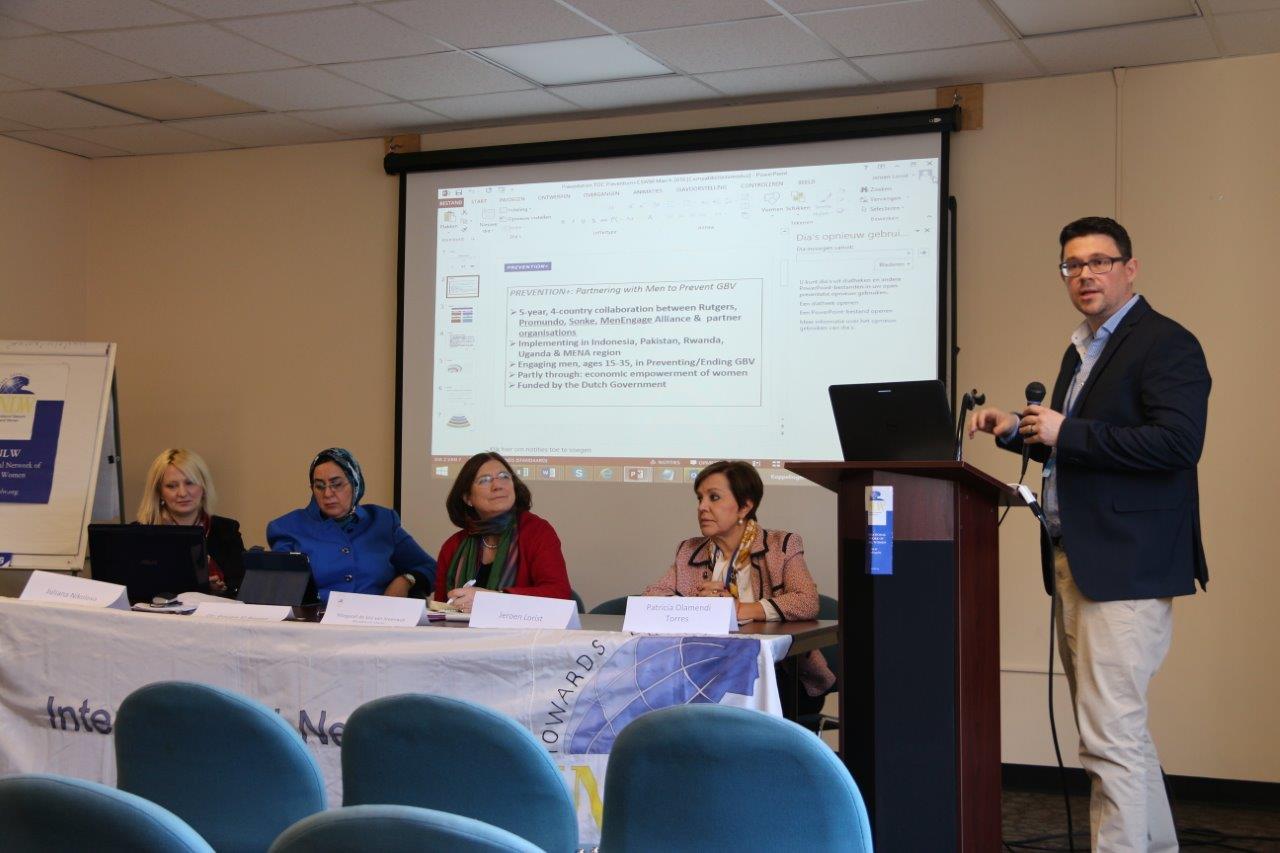 Jeroen Lorist, technical advisor at Rutgers WPF Netherlands and the Prevention+ project, started with the importance of institutions and NGO’s working together for gender equality, whereby involvement of men in the battle of violence against women is crucial. This should be done on all levels, individual, family, group, institutions and legislation level. Culture, values and customs in masculinity must be recognized and changed. A short film showed the impact of a new attitude of respect of women’s rights on men and women. Read the speeche of Jeroen Lorist (PDF) 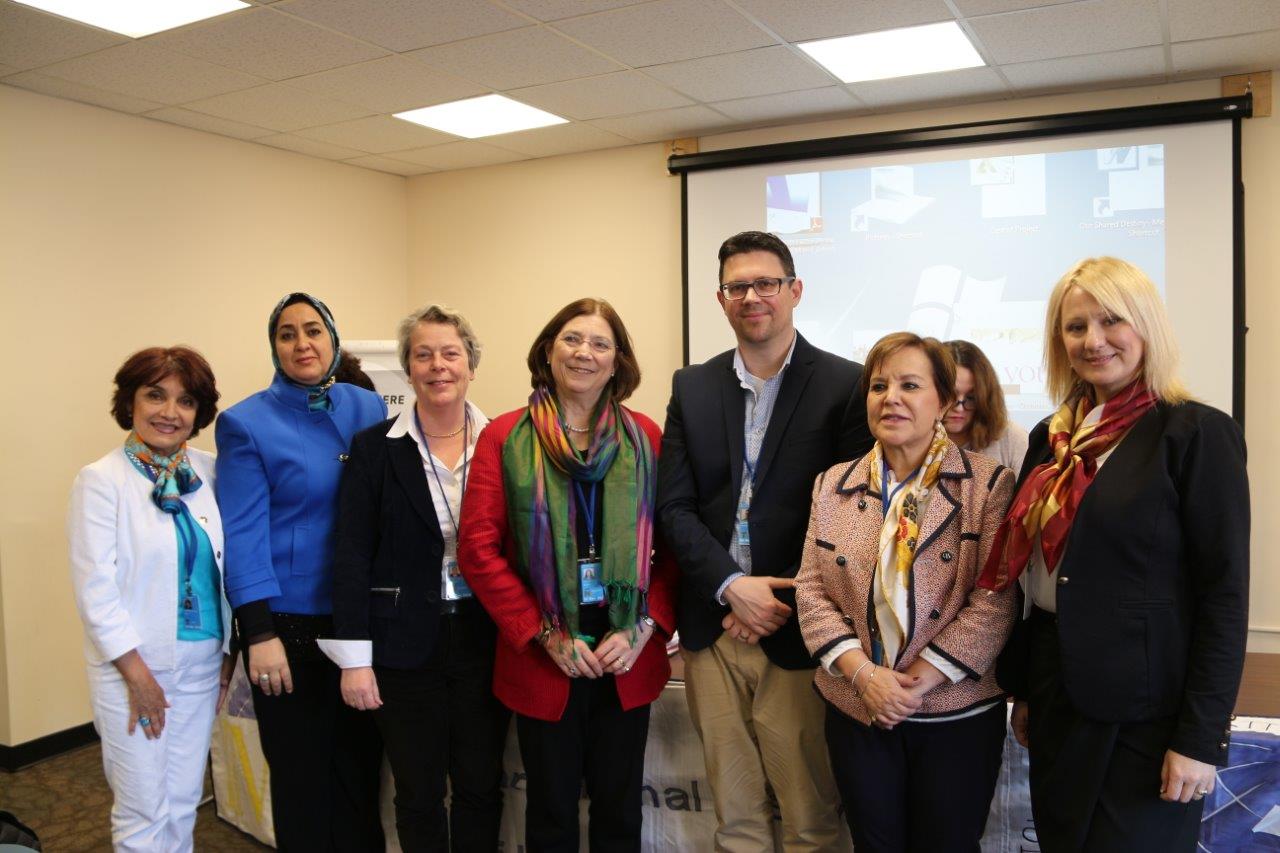 After their introductions one of the questions Margaret asked was: Is more legislation needed? Is an all encompassing comprehensive international legal framework on ending violence against women the answer? Read the questions for the discussion (docx) All participants agreed that International legislation is necessary, but at the same time education and a change of attitude of local authorities is crucial!