In this new year the Board met in New York in preparation of several events that we are organizing this year and to hear the plans of our new President, Jayanthi Devi Balaguru. She was happy to welcome our new Board members. Many thanks were given to Margaret de Vos van Steenwijk-Groeneveld (Past-President) for all her work during her 6-year period as president of INLW. Also, much gratitude was given to Tamara Dancheva for her assistance in organizing side events at LI congresses and here at CSW.

Jayanthi stressed that what we need as INLW is teamwork and to express our liberal values even more in a more active role. One of our concerns is financing events so more promoting of events and finding more finances is a priority. One of the methods to become more known is by using twitter and face book. For next year hosting a side event is again important to achieve.

Jayanthi will try to send out an annual report so that some minor events can also be reported about besides the reports that are made by board members of conferences and CSW.

The board will meet again sometime during this year with as many members present as possible.

Posted in Board Meeting, News

During the General Meeting in Dakar, Senegal, the election and appointment took place of several (new) members of the INLW Board. The Board has also decided to install a Consultative Committee, acoording to art. 4.5 of the INLW Constitution.

Several members were present during the GM. There was a warm welcome for the New President, Jayanthi Devi Balaguru who was unable to be present herself because of her work obligations. She hopes to meet members in New York during the CSW in March.

Words of thanks were especially spoken to Margaret de Vos van Steenwijk, president of INLW during two terms. She gave a lot of energy, time, wisdom, enthousiasm and friendship to all members during those years. We all thank her and hope for her support in her new position as immediate Past President.
Here you find the new formation of the Board and also the group of members who were appointed as members of the Consultative Committee.

INLW MANAGEMENT BOARD
APPOINTED IN THE GENERAL MEETING IN DAKAR 2018

Installed in Dakar, Senegal during the General Meeting of
The Interantional Network of Liberal Women
according to art. 4.5 of the INLW Constitution 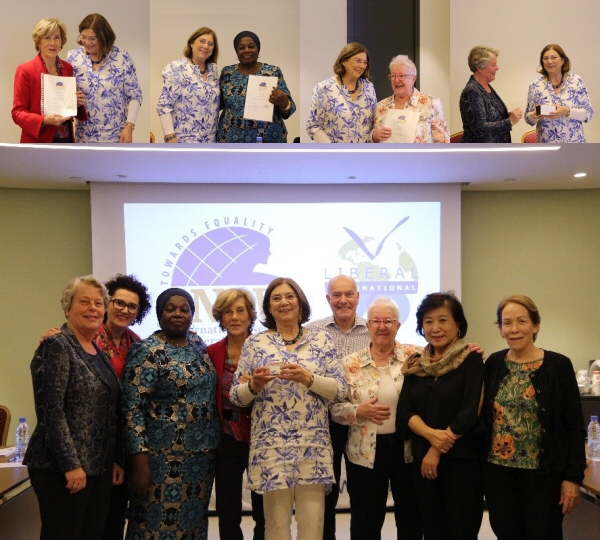 INLW Board meeting at Barcelona at 13th January 2018

In March several members of the Board will be attending the Commission on the Status of Women at the United Nations (11th March – 23rd March) in New York. 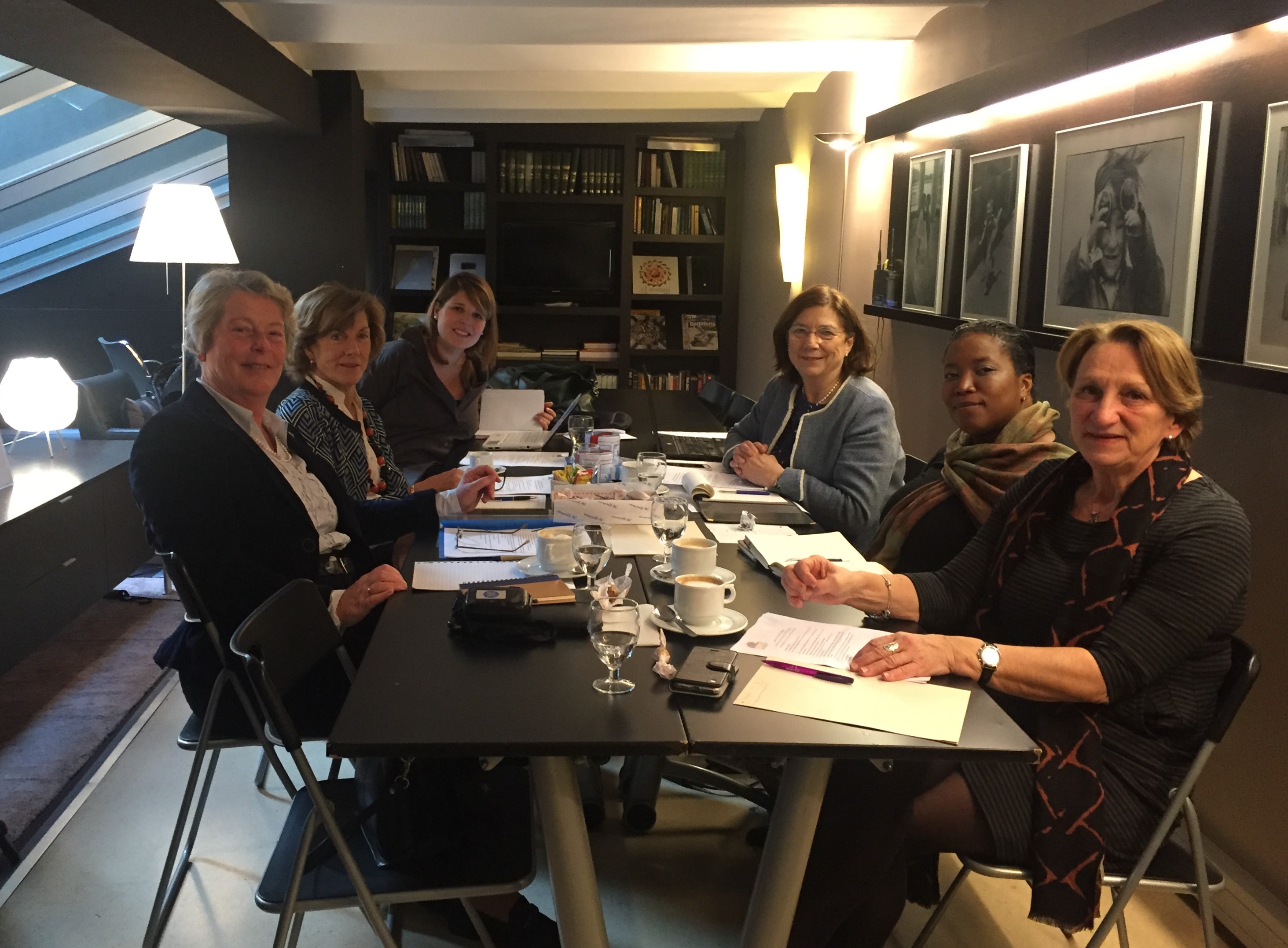 There will be a parallel event organized by Liberal International, The National Democratic Institute and INLW on Friday 16th at 2.30 pm with the theme: “Pushing Back: Strategies for Combating Violence against Women in Politics”. One of the speakers will be the Special Rapporteur on Violence against Women (SRVAW) Mrs. Simonovic, which is a great honor!

THE SRVAW is preparing a report on violence against women in politics, whereby all sorts of violence on women in any political or government situation is relevant. She is calling upon all women who have had a situation either physical or on social media to respond, anonymously if required, through the incident report form which you can find with this link:

INLW board members will attend the LI executive meeting in spring.

This autumn during our next General Meeting several members of the Board will leave due to the end of their mandate on the board. The General Meeting will be held in Dakar, Senegal, most likely on the 29th of November during the next Liberal International Congress.

The vacancies on the Board are open to all members of INLW; after the summer the Board wil announce the names of the persons that the Board supports for the positions that are going to be vacant.

Consultative Committee of the Board

In Barcelona the Board has decided that on the coming resignation, due to the end of their mandate as members of the Board, Past President, Joaquima Alemany, and Vice President, Marianne Kallen-Morren, will be appointed in the Consultative Committee (consisting of past members of the INLW Board) according to our Constitution (art. 4.5).

INLW Board held a meeting with the members that were present for the 70th Congress of LIberal International. Mireia Huerta, Secretary, Silvia Flury member of INLW, Margaret de Vos van Steenwijk, President, Khadija El Morabit, vice-president Mena region, Joaquima Alemany, past president, Maysing Yang, vice-president Asia, Lysbeth van Valkenburg, Treasurer and Ruth Richardson, who was going to be appointed as a member of the Board the next day during the General Meeting.

During the board meeting the New Manifesto and our resolutions were discussed. 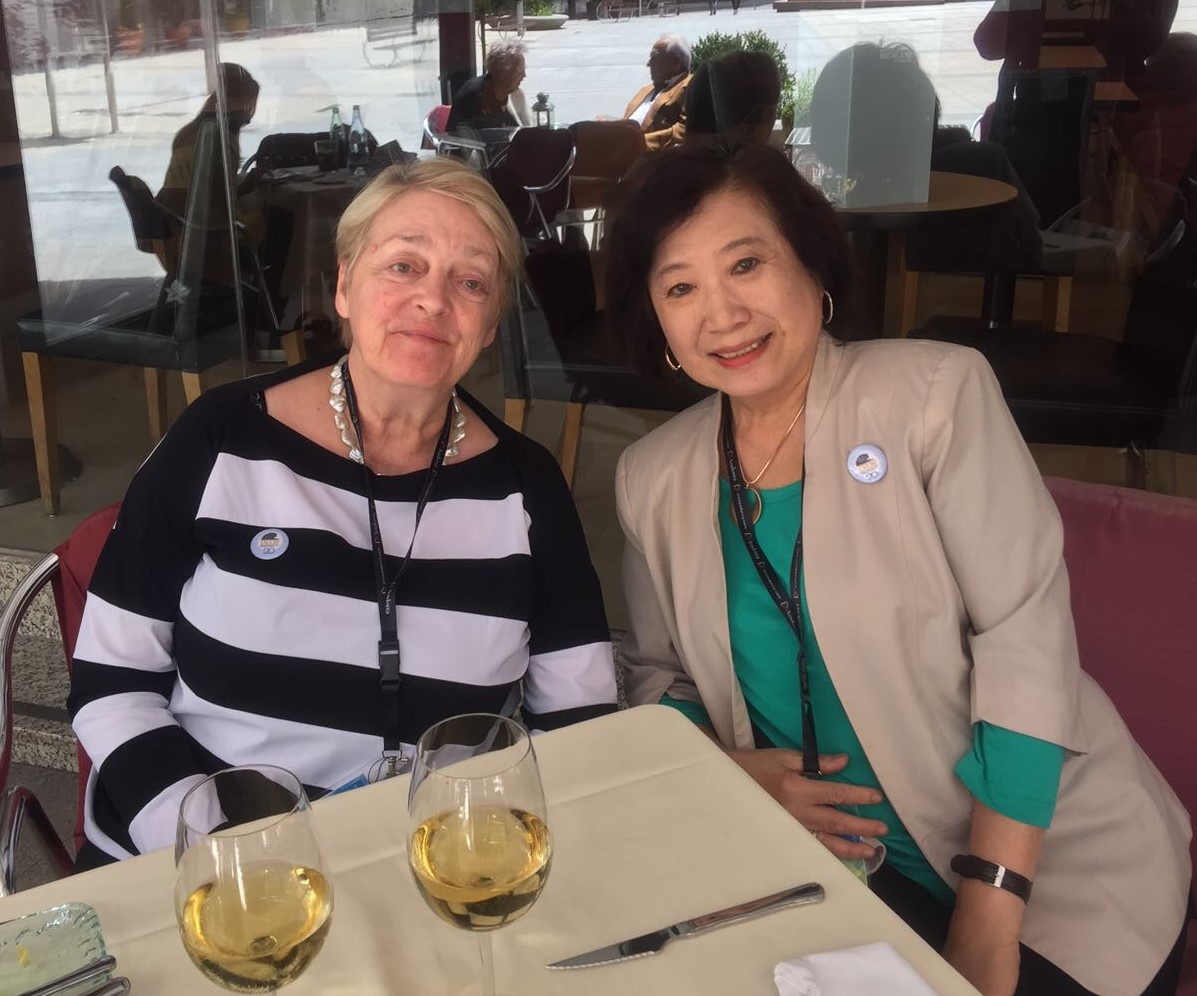 During our General Meeting, many members were present by the presentation of the book about Women and Liberalism of our past president Joaquima Alemany Roca. 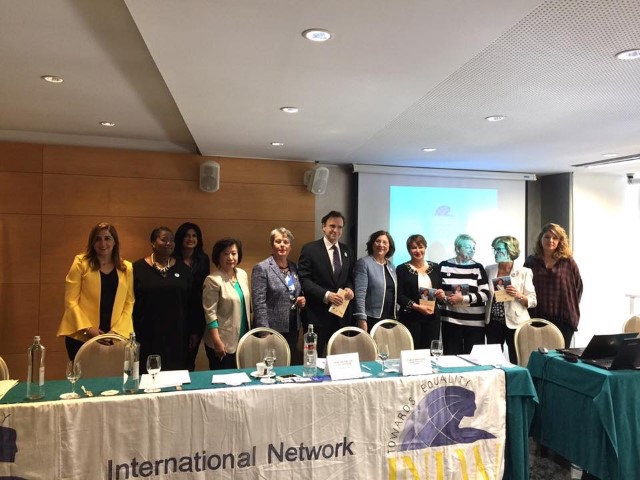 INLW board meeting in Barcelona 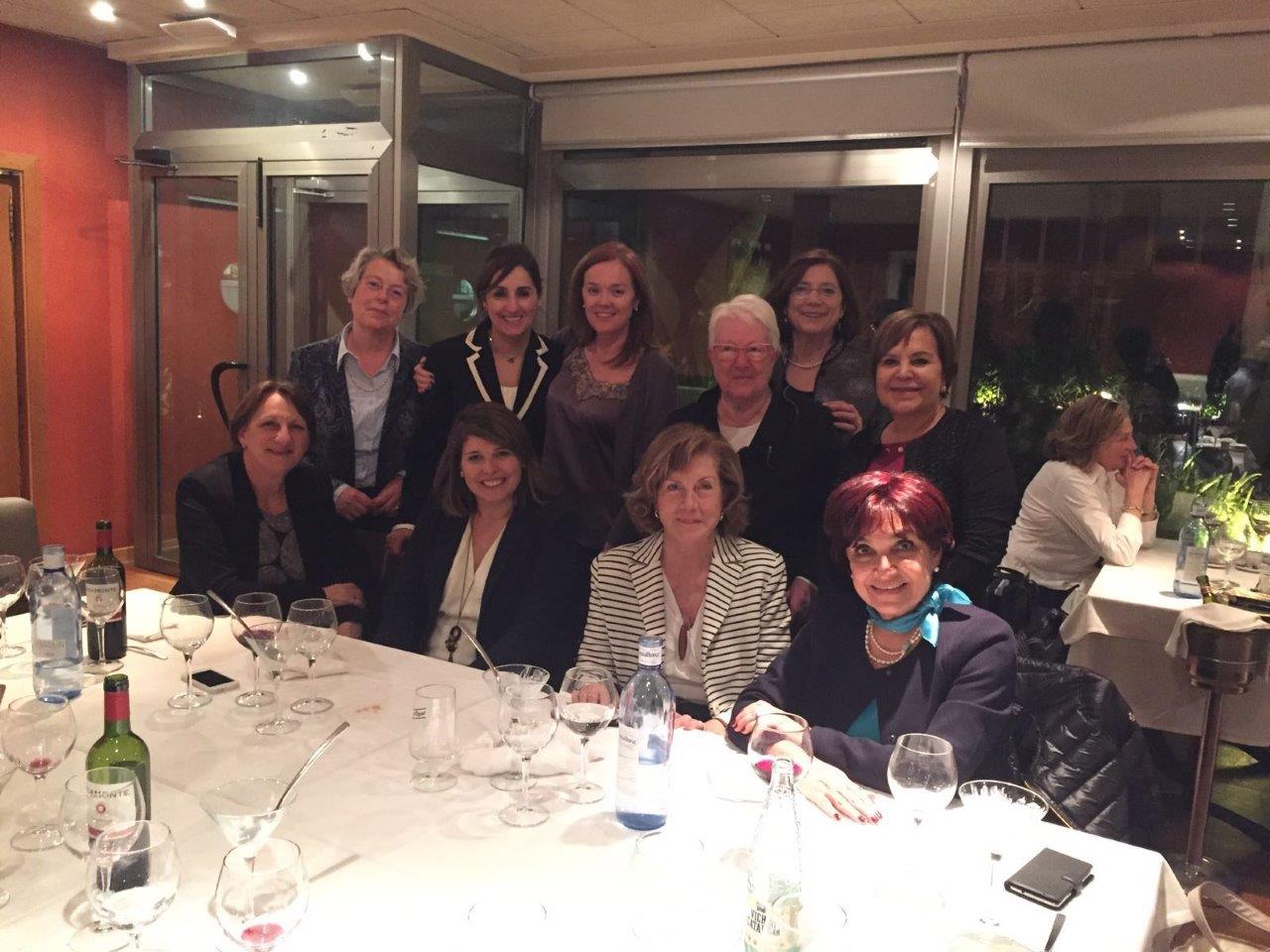 The first INLW Board Meeting since the Mexico GM with many new Board members took place in Barcelona from 8-11 April 2016.
On Friday the Barcelona Liberal women (Dones LiD) and INLW organized an event on “the Empowerment of Women for sustainable development, The new agenda of the United Nations” in the beautiful building Palau Macaya. 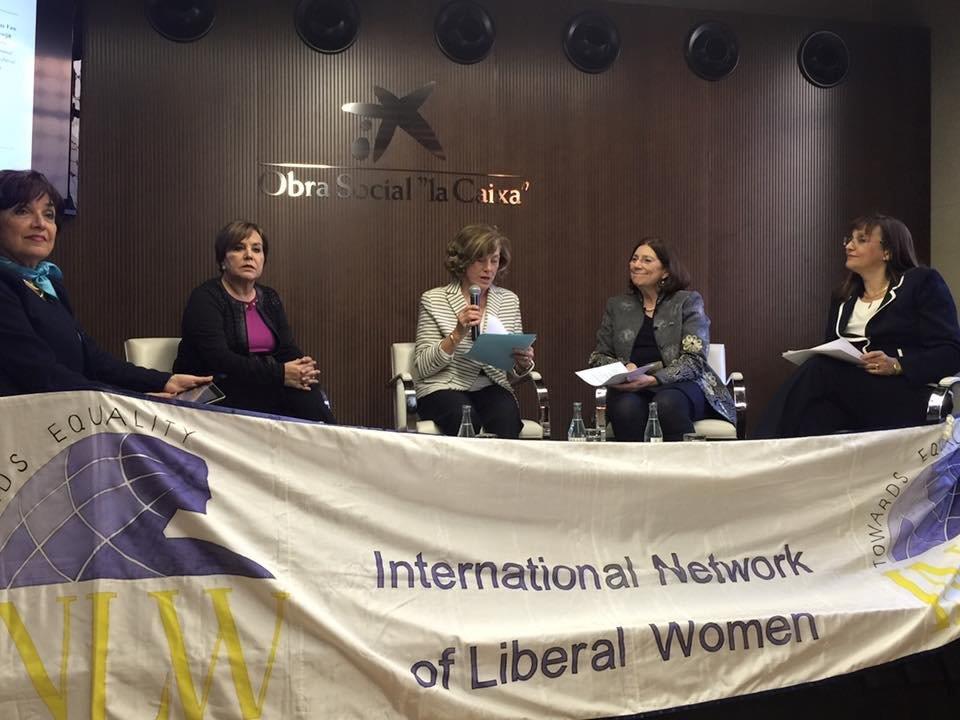 It was an inspiring evening with (fltr photo above) Leticia Gutierrez, Patricia Olamendi, Joaquima Alemany, Margaret de Vos van Steenwijk as speakers as well as a representative from Club XXI siècle in France.

END_OF_DOCUMENT_TOKEN_TO_BE_REPLACED

During the Liberal International Congress in Abidjan INLW held its General Meeting, where new Board members were chosen and installed.

END_OF_DOCUMENT_TOKEN_TO_BE_REPLACED

INLW General Meeting and Board Meeting in Manila 2011

In conjunction with the 57th Liberal International Congress which was held in Manila from June 16th till June 20th 2011 INLW held its  General Meeting and Management Board Meeting at the Peninsula Hotel.  A Round Table was organized together with the CALD Women’s CAUCUS on the theme of  “Free and Fair Trade and Women’s Human Rights”. This joint roundtable table  discussed “Benefits of free and fair trade for women”, “Women’s human rights: the externalities of free and fair trade”, “Policies for women: national, regional and global responses”.

END_OF_DOCUMENT_TOKEN_TO_BE_REPLACED

INLW Board Meeting in Barcelona 2009

Since the ELDR Congress (the Liberal European Party Congress) was convening in Barcelona, INLW took the opportunity to celebrate a Management Board Meeting on 21 november 2009. INLW president would like to have a survey from liberal women’s organisations all over Europe on the actual accomplishment of the Beijing Declaration and Platform for Action, the main theme on the agenda of the 54th Commission on the Status of Women, taken place in March 2010 in New York. Deputy president proposes INLW Vice-presidents to send a report from their regions about this item, so as to have a liberal women’s review worldwide.

It was agreed to update the website and to install a section for Vice-presidents reports from there respective regions and also to urge liberal party leaders belonging to LI to recommend their women members or organizations to become members of INLW.